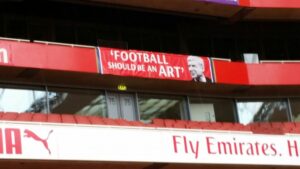 If you are a regular reader of Untold Arsenal, you will know that our one great achievement in relation to Arsenal was to propose to the club that a series of statues should be erected at the Arsenal Stadium in order to enhance the notion of “Arsenalisation” as it was called in the early days.

The plan was put forward at a meeting between three members of the executive committee of the Arsenal Independent Supporters Association (AISA) and Ivan Gazidis, who was chief executive of the club from 2009 to 2018.   At the time Arsenal had already moved into the new stadium, and, we were told, the club was keen to further establish the identity of the club within the stadium.

Being one of the three at that meeting, I took the opportunity to put forward the notion of statues saying that they would not only have within them the identity of the club, but also be a place where friends could meet before the game, rather than meeting up at the already crowded entrances.

I only suggested two specific statues, at the meeting, that of Herbert Chapman and Arsene Wenger.    As the plans subsequently developed the notion of the Wenger statue was dropped, as it was said that Mr Wenger felt it inappropriate not least since he was still at the club.

However my very good pal, now chair of AISA, came up with the idea of a banner instead.  Subsequently, readers of this website clubbed together to raise the money to have a banner with Mr Wenger’s picture on it along with his famous phrase, “Football should be an art” alongside his picture.  The names of those who participated are recorded in the Roll of Honour on this site.

The banner was featured on Match of the Day at the start of the report on Mr Wenger’s last home match.

For the Chapman statue, I suggested that it should have Chapman standing looking up at the stadium as if to say, “I made that,” and I have always felt that the designers of the statue encapsulated that totally.

And that is where the story stalled (although subsequently, Mr Wenger wrote the Foreword to a book that my publishing company published:”The Arsenal Yankee”) and did later admit that he rather liked the banner.

But now it has been confirmed that a statue of Mr Wenger will be unveiled.  Mr Wenger was of course our longest-serving manager, the manager who won more trophies for Arsenal than any other, the manager who had the highest win percentage of any Arsenal manager, the only Arsenal manager to win two doubles and the man who has won the FA Cup more times than any other manager in the history of football.

He is of course also the only manager since the first season of the League in 1889, to take a team through a whole season in the top division of the league undefeated.

It has been a long old time coming, but I really am so pleased that the notion of an Arsene Wenger statue has now arrived and I’m really grateful to the club for, at long last, taking up this opportunity.

(Oh yes, and I do hope they allow us to keep our banner up at the Clock End, as well.)