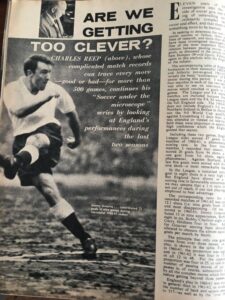 The BBC is currently running an article on its website about Charles Reep: The military accountant who brought data analysis to English game

In 1928 Reep was seemingly the first man to analyse what actually happened on the pitch in order to find out the most effective way of playing the game.  His Arsenal connection comes from the fact that he lived near Highbury (although not an Arsenal supporter) and attended a series of lectures on football tactics given by Charles Jones in which Jones outlined Herbert Chapman’s methods.

Chapman’s approach has often been reported as basically moving the centre half from midfield to playing in a back three, but it was so much more sophisticated than that.

The fact is that this is what the journalists saw, but  Chapman’s approach also involved moving the ball from defence immediately to the midfielder who was most able to put a perfect pass to one of the wingers who was already advancing on the opposition’s goal.  When the opposition attacked, the plan was to get the ball back as far up the pitch as possible.

Reap also realised that Chapman’s tactic of the very quick long ball out of defence combined with hunting the opposition players down when they had the ball in their own half, was incredibly successful, leading as it did to more shots which inevitably led to more goals.

The implication of his work was that although some goals looked utterly amazing and skilful, actually they were often the result of simply shooting at every opportunity.  The players had to accept the crowd’s jeers at wild shots off-target because they were shooting whenever they could, and ultimately that would of course get goals.

But what is also interesting is that Reep was considered an outsider, and so his tactics were denigrated by managers who felt their position as “experts” within the game was under attack from a man who had never played the game; an early version of Tony Adams’ infamous comment on Arsenal employing Mr Wenger, “What does he know about English football?  He’s French!”

Although Reep’s work had a big influence on the development of football in many countries, the xenophobia of English football meant that in his native country he was disregarded as a mere eccentric.   As Reep explained it, it was “because I’ve put a question mark against so many aspects of the game.”

The parallels between Reep and Wenger are clear; each tore up the traditions.  Wenger indeed changed everything from having one’s centre-forward hanging charging down the middle and instead having him drifting out to the left-wing, through to totally controlling what the players ate and drank.

And I mention all this now because I wonder just how much Arteta will eventually be seen as a manager who tore up the rule book.

His first dramatic action (ignored totally by the media) was to reduce Arsenal’s ludicrous yellow card total, which had seen the club become the most carded in the Premier League, to one of the least carded.

But just as Reep’s reforms were not mentioned in his day, so Arteta’s total reworking of Arsenal’s defensive tactics are rarely mentioned in the English media.  Then, despite having the second-best team in the league for the last two-thirds of his first full season, Arteta transformed the entire defence by bringing in Ben White, Aaron Ramsdale, Takehiro Tomiyasu, and Nuno Tavares.

During the long Wenger period of finishing in the top four in the league, and often winning the cup, the number of goals conceded by the club each season was generally, although not always, in the mid to upper 30s, but in the last five years the average has been 47.

This number wasn’t cut last season with the new defence finding its feet (48 goals were conceded in the league in 2021/2) and struggling to adopt the new rules of much-reduced tackling.

But this style of change brought about by Arteta and the tactical analysis of Albert Stuivenberg (who is always to be found standing just behind Mikel Arteta and whispering in his ear) is clearly what is driving Arsenal forward.

Also, it is interesting, that just as the journalists and other self-appointed experts who looked at the Charles Reep revolution and dismissed it, and who later doubted that Wenger would ever make anything of English football because he wasn’t English, are now once again failing to understand the changes Arteta has been making.

I wouldn’t be at all surprised if in 2022/3 we saw a further development which builds on the great success of the last two-thirds of the 2020/21 season with none of the “experts” in the media having a clue what is going on, and hardly noticing that Arsenal are again letting in fewer and fewer goals.

4 Replies to “How football has failed to develop, and how Arsenal are countering the trend”