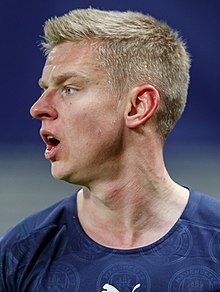 Zinchenko has been signed or is about to be signed, according to our old friend R E Ports.

He has played mostly as a left-back by Manchester City but he can play in other positions, particularly central midfield which means that he could play there in league cup and Europa games if an experienced player is needed among the youngsters.

The transfer fee is being quoted as “an initial fee of £30 million.”   He is currently with Manchester City who like Arsenal are in the United States.

The transfer (assuming that all the tales are true – and all this could have changed by the time you read it) means that Arsenal have for the second summer running spent over £100m, and it looks as if the manager is buying cover in positions where injury is likely – especially considering the Europa games to be played.

What it could mean is that Tierney will play in the league games, but with the extra size of the bench this season Zinchenko could come on as a sub if needed, and also play in cup and Europa matches, while also replacing Tierney at the slightest sign of injury for the current left back.

Zinchenko has also played in central midfield for Ukraine and so again could well cover for injury and help with squad rotation – an issue which seems to have been identified as a cause of problems that led to several unexpected bad runs from which the club found it hard to escape last season.

He joined Manchester City for £1.7m and the profit is a sign that the club is beginning to think that it is not going to be able to get away with its manipulation of the financial rules in the Premier League much longer – or it may be that the links between Arteta and Manchester City are still strong.  Or both.

Zinchenko played 31 times in the Russian league for Ufa in 2015/16 before joining Manchester City and then played 76 times for them, as well as having loans with PSV in 2016/17 and their second division nursery club Jong PSV.  He has also played for Ukraine at all levels from under 16 upwards.

For much of the time at Manchester City he was used as a backup left-back as well as a cup player and scored his first goal for the club in the league cup semi-final against Burton Albion.  However, his progress was noted when in May 2021 Zinchenko was in the starting XI for the Champions League semi-final and in the final against Chelsea.

In terms of international games, he was the youngest player ever to captain Ukraine.   Last season he played 15 league games for Manchester City, four FA Cup matches, and one in the League Cup.

This means we can now update the information on the full squad, including the notoriously difficult issue of counting homegrowns.

HG = Home Grown, FG = Foreign Grown, UA = under age and so no counted in the 25.  The nationality status of underage players is shown in brackets and doesn’t apply this season.

We also have to consider:

Patino can of course be included in the squad because of his age.  Reiss Nelson is likely to leave this summer.

If both went that would give us three foreign-grown places available – a luxury that we didn’t have last summer.  This suggests there may be some more buying to be done.

In terms of home-grown players, if we were to buy anyone counting as home-grown then we would have to sell or loan out, and Maitland Niles, and  Bellerin would be the most obvious players to leave.

The four under age players (Saka, Martinelli, Marquinos and Balogun) don’t count in the numbers game, and so we are also free to bring through any of the other talented players we have caught sight of from time to time.

Pulling all the data together the list of those who might leave is generally thought to consist of a selection from Cedric, Holding, Bellerin, Pepe, Leno, Torreira, Nelson, and Maitland Niles.  That is eight players – quite a list to deal with.   And I may have missed someone out.

Holding, Bellerin and Maitland Niles would have to be replaced by home grown players and this might be difficult so I suspect they might well stay.

8 Replies to “Arsenal sign Zinchenko, and how the 25 is looking”