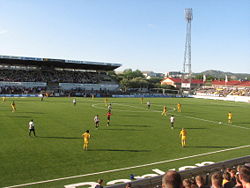 The game of course is tomorrow at 5.45 and it is expected that the temperature at that time will be just a few degrees above freezing.

On the Arsenal injury front there is not too much that is new.  Smith Rowe and Elneny are both out for the foreseeable future while Zinchenko has another muscle injury.

Arsenal’s starting XI last week for this match was

Saka, Odegaard and Jesus came on as substitutes.

Of the starting XI Gabriel, Tomiyasu, Xhaka and Martinelli all played against Liverpool and so it is possible any of those might be given a break.

Speaking ahead of this game Eddie said,”It’s going to be a tough game in Norway. They’re always going to try and play the ball out from the back. They’ve got good players on the ball and they made it difficult for us at times.

“It’s nice to get two wins and two goals. I’m just going to try and keep doing what I can, keep pushing and hopefully keep scoring.”

Martin Keown, speaking about Eddie said recently, “Nketiah is improving all the time. He’s now someone to turn to. I feel he’s gone to the next level, but there’s some way to go yet. He’s turning into a man now in terms of his development. He just needs those opportunities.”

The stadium pictured above has had an interesting history.  It holds 8,270 fans, all seated, and the pitch as one would anticipate this far north has artificial turf laid in 2006, and of course under soil heating (although being artificial there is no soil).  The temperature at the time of the game is expected to be around 5 degrees centigrade.

The stadium is owned by the local council, something that came about because in 2008 the club received illegal public funding.  To recover from the venue was sold to the municipality.  Which to me rather seems like having your cake and eating it, but then Norwegian public funding law is not my strong point.

Several attempts have been made to upgrade the stadium but lack of funding has stopped this from happening (which seems a bit odd in oil-rich Norway, but I’m no expert on their finances).   However, a new plan has been put forward to build a new stadium on the other side of town, with a slightly larger capacity, with the project to be completed in two years when  Bodø will become the  European Capital of Culture.

And the latest results for the club…

So apart from losing to Arsenal, they are doing ok of late

Kick off is at 5.45pm on Thursday with the game live on TV as is usual for Europa matches.

2 Replies to “Bodo/Glimt: heading for the return match – artifical turf and public scandal”