In our match against Leicester we had an incident where Alexis tried to make a pass and a Leicester defender handled the ball and the ref gave no penalty. Let us have a closer look on this particular incident with the laws of the game in hand, the instructions towards referees and using a few pictures to show what happened.

First of all we use the most important theoretical thing and I quote this from the laws of the game from Fifa:

A direct free kick is also awarded to the opposing team if a player commits any of the following three offences:

• spits at an opponent

So handling the ball deliberately is a foul. That should be clear to all of us who know a bit about football. Now does this mean that each time the ball hits a hand it is a foul? No as the a not deliberate handball is not a foul. Of course we can argue till the end of times about what is deliberate or not. The ref has a lot of room for interpretation in this. And so Fifa tries to help the refs by giving them some instructions on how to determinate those calls.

And so we quote from the instructions from Fifa:

Handling the ball involves a deliberate act of a player making contact with the ball with his hand or arm. The referee must take the following into consideration:

• the distance between the opponent and the ball (unexpected ball)

• touching the ball with an object held in the hand (clothing, shinguard, etc.) counts as an infringement

• hitting the ball with a thrown object (boot, shinguard, etc.) counts as an infringement

The last two lines I just included to be complete as they have no bearing with this article.

So there has to be a movement of the hand towards the ball. We will check this with a picture to check this. We also have to keep in mind the distance between the opponent and the ball. That means that if a ball bounces between two players who stand close to each other and it touches an arm this can be seen as an unexpected ball hitting the hand and then it is no foul.

The 3rd line about the position of the hand is about the natural position of a hand. If you have your hands next to your body and your hand touches your leg and it touches the ball it is not considered to be a foul. If the only way to avoid contact would have been to amputate the arm and remove it from your body we can assume that you could not prevent the handball. This is the hands touching your own body position.

So let us now check what happened and for this I used a clip from arsenalist and took a few pictures of the video. The complete clip can be found here and I hope he doesn’t mind if we use his fine clip for further analysing this incident.

Let us look at the starting position of the incident. 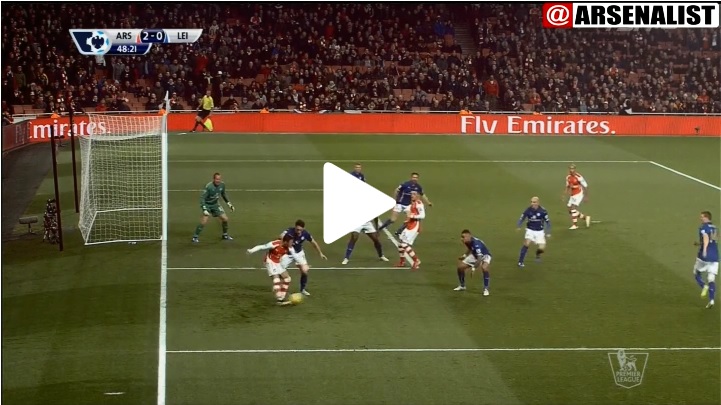 Sorry for the big arrow in the middle of the picture but that just happened when I froze the picture. This is the moment Alexis has already kicked the ball. I think I was a split second late. But the most important player you have to look at is the player who will handle the ball. As you can see he has his left arm inside his body.  If the ball would have hit his arm in that position there would be no foul for me. If you hold your arms in front of your body there is not much you can do apart from chopping your arms off to prevent it being hit by a ball.

But how was the position when the ball hit his arm?  Let us look at the next picture. 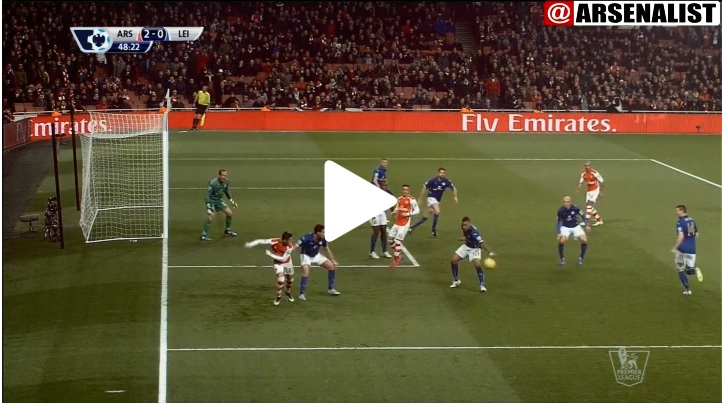 The first thing I want to point at is the fact that the arm of the Leicester player has moved from inside his body to being completely away from his body to the outside. This means that the player himself has moved his arm towards the ball. If his arm had been in front of his body there would have been a case to say that it was ball to hand. But the player moved his arm himself while standing almost still and so he made a deliberate movement.

So the Leicester defender didn’t have his arm in a natural position (he did at first) when the ball touched his hand. It is fair to say that this is a good example of a deliberate handball. And thus a penalty should have been given.

I would say that this once again is a good example what a difference a video ref can make. After seeing it one time and then freezing the image at the critical moments (playing the ball and handling the ball) I had seen this within 5 seconds. Time to bring on a video ref, Mr. Riley. And I do feel that we will not get a 98% correct score from the ref when we review this match later on.

Anniversary of the day

Coming up next: “A fine example of Type III match fixing”

35 Replies to “Handball or not? Analyzing the decision.”