Sitting in the north bank always made me feel part of the action – being at the heart of Arsenal support.  But this season being in the front row of the East Upper, facing the 18 yard line at the North Bank end, I get a panoramic view of what the North Bank are up to, as well as a perfect view of the game.

Of course when I moved at the start of this season I never thought I’d use this perspective to be able to get a clear view of what the protesters were up to, but so it turned out to be.   And given that the protesters were all ordered to put up their notices at the same time, it was easy to count how many there were.

I counted 55 placards held aloft.   Out of a crowd of around 55,000 (I didn’t count the crowd, and the number given by the club is always the number of tickets sold, not the number of people there so that is a guess.)   Maybe I missed a few, and if someone said “I made it 75” I wouldn’t argue.  It was something in that order.  Certainly under 100.  As I said, I sat there and counted them.

As a way of trying to influence the club it wasn’t very effective.  And not always very co-ordinated Blacksheep, standing in the North Bank Lower Tier told me that the young lad he had noted before, isolated in an Enough is Enough t-shirt, was once again there, but had mistaken when the time was to hold up the placards and went several minutes early, holding it up in splendid isolation until he realised his mistake.  It seemed to sum it all up.

But what happened next was perhaps the most interesting.  As the 55 (or maybe 75) placards went up, so the chanting, which had been much, much stronger than of late, went up considerably.  There was “Arsenal Arsenal Arsenal” and some booing.  There was quite a bit of “One Arsene Wenger” as well.   It was all very confusing.  I was expecting more placards, and applause for the placards, not the considerable rise in noise, the counter-placards and the clear pro-Wenger messages.

As an organised protest it most certainly didn’t work.  And so this morning I turned to the Daily Telegraph who have been wholehearted in their fulsome support of the anti-Wenger movement for years, and this season have utterly upped the volume, publishing anti-Wengerian commentaries every week – sometimes two or three times a week.

Their headline today is in the bizarre questioning “how and why” (sometimes varied by using “when and where?”) style that now dominates the paper’s football pages.

How and why did Arsenal beat Norwich and how vicious were the protests against Arsene Wenger?

This was supposed to be the day on which Arsenal fans made their feelings towards manager Arsene Wenger and the board crystal clear. But, while the ‘time for change’ protests were both visible and audible, they did as much to encourage support for Wenger as they did to spark revolt.

There is a long distance shot which manages to capture many of the placards with Wenger standing in front of them, but to be fair they also have one of the “Proud of Arsene Ashamed of the Fans” placards.  They then continue

Many of those who did not hold up placards in the 12th minute booed the protesters and there was a loud chorus of ‘One Arsene Wenger’ which the Frenchman appeared to acknowledge. Arguments broke out between supporters inside the Emirates with different views, but the atmosphere was a long way from mutinous.

The loudest jeers were reserved for the decision to take off Alex Iwobi instead of Olivier Giroud, just minutes before the striker nodded the ball down for substitute Danny Welbeck to score. Wenger will have no doubt enjoyed getting that one right.

It was indeed a good move both by Wenger and by Giroud, for this was not one of Iwobi’s best games – he is still learning the trade after all – and leaving Giroud on the pitch while placing Welbeck on the wing was enough to pull the defence both ways and lead to the goal.

The affair leaves both Red Action (an organisation officially recognised by the club as a voice of supporters) and the unrecognised Black Scarf (whose credibility was diminished, if there ever was any, with its outside the stadium protests several years back which involved maybe 100 people at most.  Whether Red Action will continue to enjoy the same ability to meet with club officials that it has had in the past will be one of the interesting outcomes.   Arsenal Independent Supporters Association – the group of which I have been a member for many years – maintained its position of not commenting on matters involving the manager or the team.

Now, I must admit that the line taken by the Telegraph is different from that in the Guardian, which spotted 500 placards (just on 10 times the number that I saw and 1% of the crowd) and the Independent which saw roughly 10 per cent of the home fans stood and directed A4 sheets with “Time For Change” printed on them at Arsene Wenger standing in his technical area.  That would be about 4500.

So how on earth could I sit there on high looking down at 55, each counted individually, while the Guardian had 500 and the Indy 4500?   Of course you can take your choice as to who is making this up – certainly two out of the three of us are – and by such a degree that “making it up” rather than “mistaken” is the explanation.

But here is a point.  As I said at the start, I sit in the front row of up East Upper.  The only bit of the ground I can’t see is the back half of the East Lower, and maybe there were quite a few placards there.  Maybe that was the dominant part of the ground for placards – although I suspect not, because I often watched games from there since we moved to the Ems, in the years when I didn’t have a season ticket (having given it up during a period of post-divorce financial hardship in the latter years at Highbury).  It was not the most active area in terms of the home support.

But the press sit at the back of the West Stand close to the south-west corner of the ground, so to see the section when Red Action stand (the north west quadrant of the ground) it quite difficult.  You can see some of it, but not all, and even to do that you have to stand, lean forward, and twist your neck round a lot.

So I think that if the correspondents of the Indy and the Guardian were there (and I often doubt if this was the case) they could only see a part of the ground, and thus estimated what the core support was doing.    If they were watching their monitors taking the TV feed (which I know is what they often do, and which is why they miss some of the more interesting events in matches) then they could indeed have got the wrong story.

The Indy has no picture to back up its assertions, and nor does the Guardian.   But the Indy does have this which must be the most boring picture from a Premier League match ever. 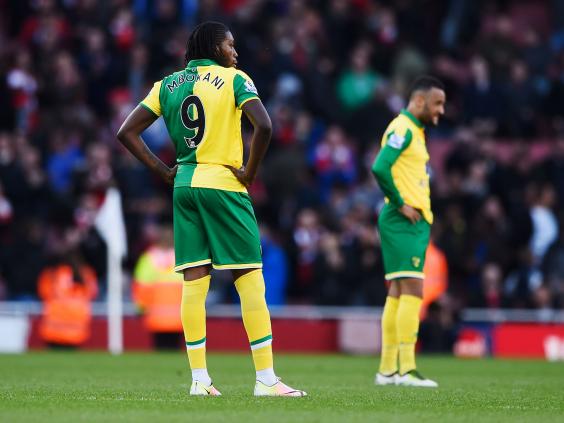 It is from Getty Images, and appears within this article   Why, I wonder, publish this and then write a lot about 10% of the crowd holding up placards.