You might remember that there was a lot of fuss last September when the transfer window closed and the idea was written down and then copied over and over that Arsenal was the only major club in Europe not to sign an outfielder in the summer.

Following that Untold started to run the league table with an extra column showing how much each team had spent in the summer  and where they were in the league.  We also did it not just for that summer but across the last five years, taking the net spend of each club.

We then combined that with research into how effective new big-money signings were in the following season over time.   That piece concluded that only 25% of such players had a major impact in the season following their signing.

I chose to keep publishing the table of transfer money as an extension of the league table for several months, until the notion that Arsenal was failing because of a lack of signings died down.

But now the Guardian has either coincidentally or because its writers read Untold (you can decide which) has published the astounding news that the figures relating to transfer money spent “show there is no correlation between spending on transfers and sporting achievement.”

The article is by Simon Burnton, a sub-editor for sport at the Guardian.    As we noted in September Man City were the money mad club, trying to buy their way to another title with Raheem Sterling, Nicolás Otamendi and Kevin De Bruyne.  As the Guardian piece says, “Their outlay of £124.4m comfortably exceeded the combined total of the rest of the Premier League’s top nine but they finished the season in fourth, two places worse off than last year, with 13 fewer points.”

The table clearly shows this year as it did last year as it has done for years that just spending money has virtually nothing to do with where a team ends up in the league.   The other factors involved  include how well the player settles in, the success of the team formation imagined by the manager, injuries, form, tactical nouse of the manager, luck, refereeing decisions, how well the player’s family settles in to a new home etc.

Eight of the 10 bottom-half sides spent more than Arsenal but that didn’t help them rise up the league and overtake Arsenal.  Under half of the top top clubs in the league were in the top ten spending table.

Of course a lot depends on what one spent in the years before.  The Championship clubs spent a lot because they had much lower incomes in the previous season and so spent on the promise of the money to come.  I would guess Norwich are now in trouble, unless they managed to put all their players on a contract which reduces their salaries dramatically in the event of going down.

Meanwhile we bought Petr Cech for £10m, and guess what, (well you know) he won the Golden Glove with 16 clean sheets.  Cech was beaten just 31 times in 34 Premier League appearances.   Worth remembering when people talk about our crap defence.

But there is more, because last season we promoted players up through the ranks as we always do.  If we had bought a full back for £30m and he performed like Bellerin, we’d have said it was a good deal.  But Bellerin was just part of the production line: Coquelin and Iwobi obviously are part of the whole process.  And the winter purchase of Elneny – what a prospect he looks, and what a bargain.

And then look at our loanees

If things go their normal way (normal for the last couple of years) one of those will step up, and so will one or two of the current under 21 squad.  Joseph Willock would be my choice, along with Jeff Reine Adelaide.

The bloggettas and the mainstream websites, plus TV will of course ignore all this and just revert to the notion that buying is everything, which is a bit sad really.

But while noting the key points let’s also not forget one or two other issues that have emerged in the dying days of the season.

There was the hilarious (but seemingly true) story that La Liga clubs will be fined (or “financially punished” as the papers now like to put it as it sounds if they have written something important) if they show empty seats on television during live games.

So presumably lots of free tickets to passers by in Spain then as regulations that are due to come into place next season will demand that sections of grounds which appear prominently on television must be fully populated.

Barcelona won the league in Spain by one point, but the notion that this might be a competitive league is rubbish.  Only three teams were ever in it.  Leicester as we know won by 10 points as did Bayern Munich (but we knew that before the season started) while PSG won the French league by 31 points, which makes the whole process rather pointless.

There have also been some typical headlines this past week.

was the calmest of the pre-final wild ranting predictions by the press.  Now they are full of how Liverpool need deep rooted changes in order to get out of their usual 7th and 8th slot in the league.   There was also of course the equally wild headlines about the Europa final.

While back with the football, finally the media has stopped being taken in by Kloppomania, at least for a few days.  Here are a few headlines.

Liverpool vs Sevilla player ratings – which Reds flop is awarded just 3/10 in Basel?

One match which was a defeat, and the press have moved from the new megastars of football to 3/10.  Funny isn’t it?

This also turned up – I am sorry as I don’t know the source, but if you do please say so we can acknowledge it.  (And also tell the creator that if they want to know a bit about which colours are easy to read and which not, that’s one of my areas of study, and I’ll be happy to spill the beans). 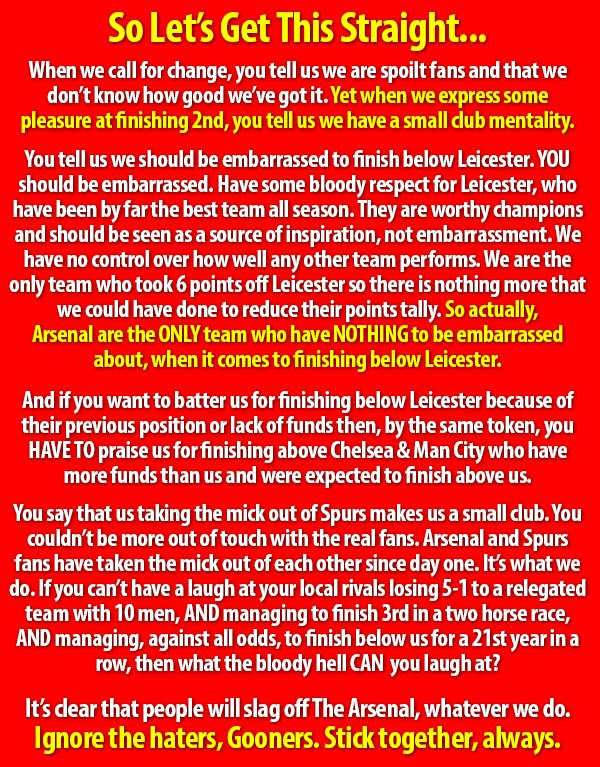 Last, Ozil has been doing his thing again.  Here are his headlines from the Daily Mail…

Meust does this stuff and lots, lots more – remember…

as he used his World Cup bonus for that.  And sometimes it gets a bit of publicity – but what is interesting for me is that he keeps on doing it, in different places with different people, choosing causes, giving time, giving money.  Good on yer Mes.

58 Replies to “There is no correlation between spending on transfers and results, plus Liverpool turnaround and Mesut.”