I get sent a fair number of video links but rarely pass them on, because most other sites do that, and we are after all Untold.

But this one from FFDTV is worth watching – all the way through.

Here is what they say…

Trae has been fast-tracked at Arsenal and plays for the U18s aged just 15 (with Jack Wilshere, Chuba Akpom & the promising Reiss Nelson the only other players to do so at that age). Trae scored his first goal for the U18s last Saturday against Tottenham & recently played at the U19 Champions League level as well as playing for England at U17 level. Trae also has an impressive show reel including flooring a defender with a piece of skill in a recent England match, recreating Messi & Suarez’s penalty last season as well as scoring from the half-way line against Barcelona.

The penalty (are you watching Robert and Thierry) 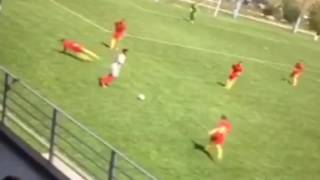 The Long Sleep recalls a time when professional footballers in England were inextricably tied by contract to their club and not allowed to earn more than the statutory maximum wage.  It traces Arsenal’s fortunes through that era, as well as the stand taken by one man who went on a 141 day strike against his club – a strike which led to the creation of football as we know it today.

Now available to purchase on line as book or Kindle version at
www.arsenallongsleep.co.uk

———————
Recent stories from Untold Arsenal and the Arsenal History Society

The 10 major sources of corruption and dubious practice in football

November 1934: vying for the top of the league, and the Battle of Highbury

International football is dying, and at last the media discover why.

At last Fifa being taken to court: what the legal case claims.

The leader of the Red Army

What is likely to happen in Arsenal’s next four games?