NOTE: FOR ANY WRONG DECISION MADE THERE WILL BE NEGATIVE POINTS AWARDED FOR THAT SPECIFIC KIND OF EVENT.

NOTE: ANY INCORRECT OR WRONG DECISION/NON-DECISION WILL BE HIGHLIGHTED WITH A RED COLOUR.

NOTE: ANY DECISION THAT INVOLVES DOUBT IS HIGHLIGHTED AS BLUE IN COLOR.

NOTE: The word ‘FOR’ is used to show IN FAVOR OF.

NOTE: All the Laws Of The Game used are referenced directly from the following link. “LAWS OF THE GAME 2016-2017”

Mark Clattenburg was the ref for this match.

And a typical Clattenburg performance as we are more and more getting used to. And that is not a compliment.

A first miss was a kick on Xhaka from behind in the opening minute to set the stage. A kick from behind on the Achilles should have been a yellow card. Then giving a throw in in favour of Everton (again Xhaka involved) when it was Barkley who kicked it out. 68 seconds on the clock and two wrong decisions against Arsenal. The tone was set.

Let us move on to the Arsenal goal and what happened before. Jagielka brought down Coquelin and Jagielka was the last defender. A foul outside the penalty area, Coquelin would have been one on one with the keeper. So it should have been a red card. No, said Clattenburg and he then pointed at the Everton right back to show Monreal that there still was a defender covering. You can see Clattenburg point in the direction of the right back in one of the clips. But when we freeze the image and then you have to look at the circles I added to the picture and look at the position of that right back. Here is the picture. 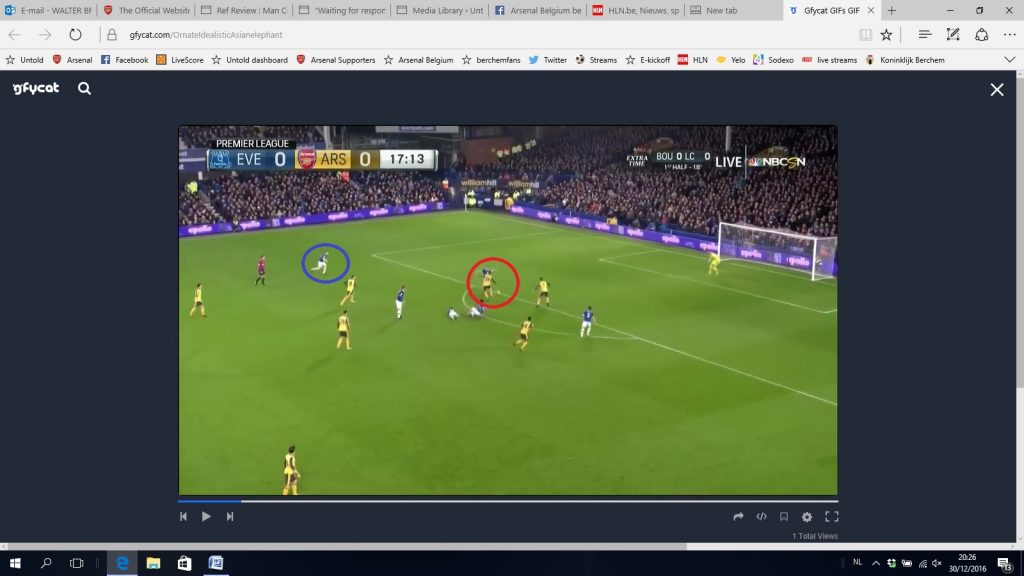 And what do you see? Well the right back Clattenburg used as an excuse to not give a red card was something between 10-15 meters away from the incident. Now he might be Superman in disguise or maybe Spiderman but no human being would be that quick to come to recover and stop Coquelin from taking a shot at goal.

So Clattenburg was either incompetent or…. well fill in yourself. But he sure didn’t make the correct decision. And by doing this (look at the picture) 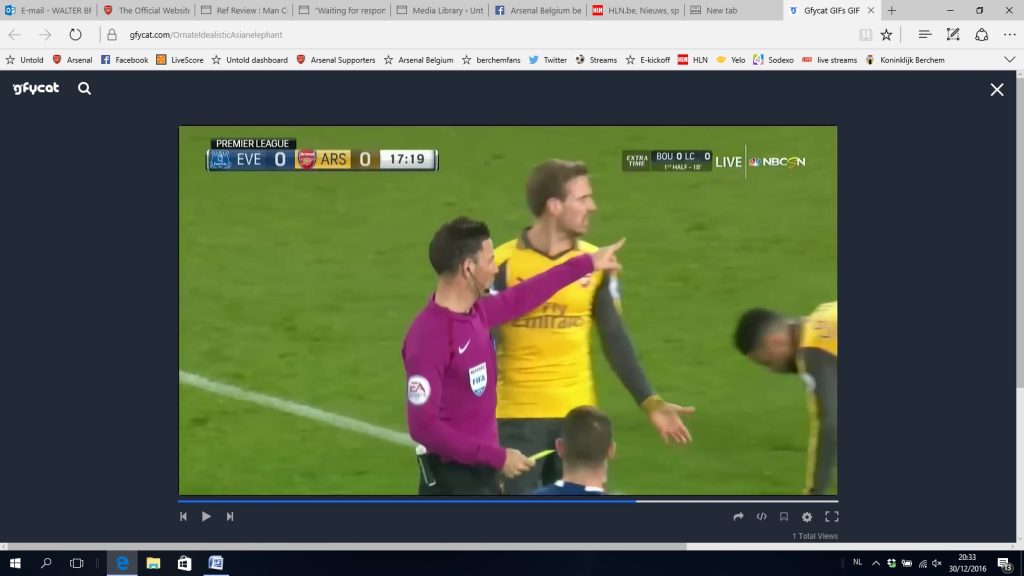 he showed that he was completely wrong.  And minutes later Jagielka showed clear dissent against the assistant referee and best ref of England and the world Clattenburg allowed it to happen…. that should have been Jagielka his second yellow card (if we take the first yellow card that was given). Not for Clattenburg who let his assistant down. Poor from the referee. You always stand up for your assistants. Clattenburg didn’t. Very Poor.

The match then continued with Everton players kicking left, right and centre against all the Arsenal players with only the worst things to be called. I’m not going to mention them all as there were too many of those incidents. McCarthy came in short before half time with a dangerous attack on the Achilles of Coquelin and again the red card stayed in the ref’s pocket.  No wonder some Arsenal players were furious with this kind of non-refereeing from Clattenburg. Where are the days we were happy as Clattenburg seemed to be the only ref who was willing to clamp down on wild tackles and lunges….. Went to too many concerts I think…..

As a result the first half score was only 54.5% and 46.8% (Weighted) Extremely Poor. Minutely better than tossing a coin.

The second half was a bit better. Luckily. But still too many fouls escaped the ref. As we can’t talk about them in detail we just will get on to the main things. Everton second goal. The ball was headed out by an Everton player and the ref gave a corner. And after that Everton scored. If Clattenburg had made the first correct decision on the corner the goal would never have happened. So as a result of a wrong decision from Clattenburg Everton could score their winning goal.

And things weren’t over yet. Oh no. Mirallas (a brainless chicken as we call him in Belgium) seemed to pull Bellerin in the penalty area when Bellerin was chasing the ball. It would have been a typical Mirallas foul but as the TV companies were too busy with showing nothing they forgot to give a replay of the incident so we have to give it as a correct decision.

But in the last seconds Mirallas (again) kicked, missed the ball but made contact with the leg of Alexis. Penalty one would think… oh no this is Clattenburg who has to pay back his paymasters for all the finals he was allowed to do over the last year. And so he did what we are used to. No penalty for Arsenal and Everton won the match.

There were two correct major decisions. One was the non-penalty on Bellerin by Mirallas which is added in blue colour due to looking like a penalty but no replay shown. Other was the second yellow card against Jagielka in the 90+ min, , which was only his second yellow card as a lesser punishment only due to the referee failing to give him a red card very early in the game. Refer to minute 17:16

Well there you go, we all can talk long about how bad our performance was…but that doesn’t necessarily means that the referee should do the same against us.

Finally bias score.  The “worlds best referee” managed to make 22 errors in this match. And not surprisingly 19 went against Arsenal and 3 against Everton. A bit unbalanced don’t you agree Mark?

2016: The year many of us realised football was utterly broken but the media continued to deny reality

New from the Arsenal History Society

The AHS A to Z of Arsenal players

54 Replies to “Ref review Everton – Arsenal : the Clattenburg-Dean combination, a lethal one”