As I sat in the stadium for this match I had to form my first opinion on the sending off based on the view from the upper corner above the Burnley fans. As the foul was made on Dufour, whom I know from Belgium, I thought he was overdoing his reaction. I think he did. Because that is what he does.

I found that the tackle at first sight had to be filed under the comment: “don’t commit such a tackle over there on the field. No need for this. No need for this at all. Just stay on your feet and run behind the ball and try to recover it or make a little foul on the player that would get in possession after Dufour passed the ball.” But Xhaka dived in and made contact. So a red card CAN be given.

Based on what happened thereafter …it looks harsh. If the ref had applied the same hard line for every other foul worthy of a red card there would have been a few more sending offs. Mustafa was caught in the face a few times with an arm and elbow flying around. But not even a yellow card was given. But no problem. It just proves that Untold is right and has been right for a few years.

We had the boot in the face of Koscielny that won us the penalty. Again no red card given. But a high foot against the face of an opponent…. if that is not a red card…. then when is it a red card? I think Moss didn’t even give a yellow card. But no problem. It just proves that Untold is right and has been right for a few years. (I leave the offside decision for the ref review 😉 – don’t want to give it all away yet).

But back to Xhaka. Xhaka didn’t dive in from a long distance so the force he applied was rather small. And that is the difference between using excessive force.  Or just being reckless. So a  bit of a borderline tackle. But the red card can be given. No problem.

It just proves that Untold is right and has been right for a few years.

Now how does this prove that Untold is right and has been? Well it shows that refs know the laws and know how to apply them. Moss is even an expert in this. Alas… the big problem is…. that he only seems to know it when an Arsenal player is making the foul. The other way round is no problem of course as he showed in this match even.

But it seems that as Untold has been proving for a few years now that there are two different kind of measuring sticks being used in the PL. Is the foul done by an Arsenal player: no lenience and red cards are given. If the fouls happen in other matches and by other players: no problem.

Just look at these images below. 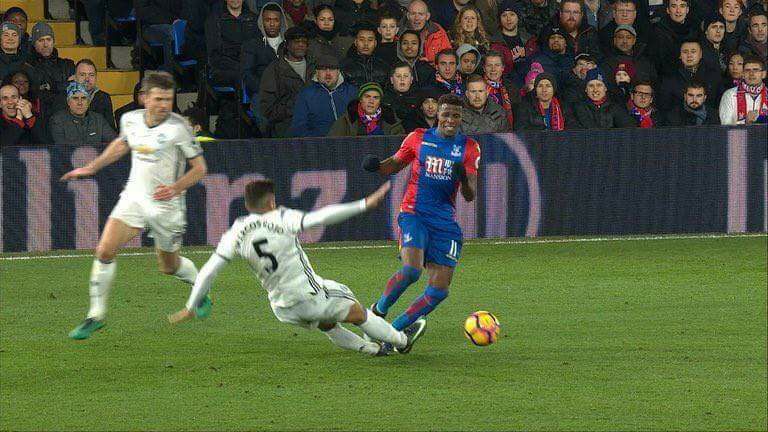 Rojo diving in from a distance throwing himself towards the Cyrstal Palace player with both feet and going high in the air. Result? A yellow card. Tell me what was the worst foul? Rojo or Xhaka? Xhaka diving close to the ground or Rojo flying in from a distance ? Well according to the referees from the PGMO the Xhaka foul was far worse as he deserved a red card. Rojo got away with it. No problem. It just proves that Untold is right and has been right for a few years. 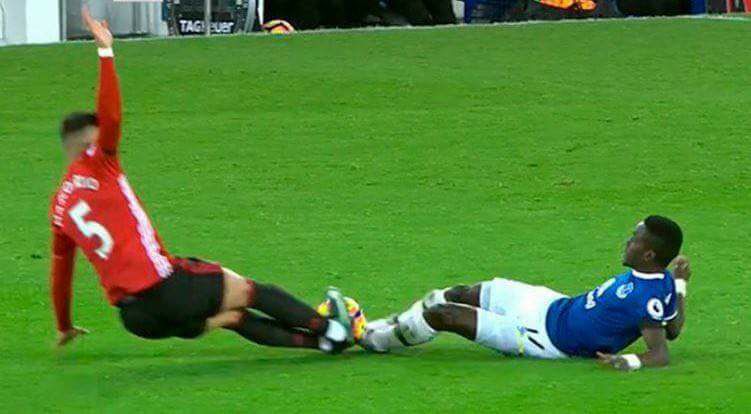 Oh look the same player. Diving in again from a distance with both feet off the ground. The Everton player came in over the ground by the way. And again according to the PGMO referees no red card had to be given. No problem. It just proves that Untold is right and has been right for a few years.

And here another one. 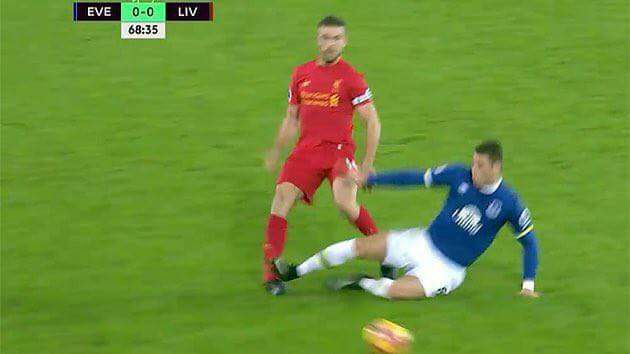 Look at Barkley going in with his studs just above the ankle from the Liverpool player. No red card given. And Dean was praised by all and everyone for not giving a red card. Bizarre ain’t it? Yes it is in fact.  Look at the distance between the ball and where the tackle is made. But no red card is saying the PGMO referee. No problem. It just proves that Untold is right and has been right for a few years.

The Xhaka sending off and these quickly gathered situations prove that Untold is right. For years we have been saying that Arsenal players are treated differently from other teams. We have gathered evidence for years that there is an (almost open) anti-Arsenal bias. Based on years of gathering evidence. People like to brush this away. Saying we are biased. Well we might be biased but we surely aren’t the only ones.

We have been saying that Arsenal players are treated differently by most referees for years. And this incident once again confirms it.

I can understand the furious reactions from some fans when they see the Xhaka sending off and feel hard done by. But I do admit that from the referee review point of view I don’t have a big problem with this sending off…. if it weren’t for the fact that other players as shown in this article can do what they want without being send off.

It just proves what we have been saying for years and what we find again this season: there is something strange going on when referees do Arsenal matches. And that explains the reactions from people that don’t agree with this sending off. And they even do have a point. A big point in fact. Because if referees would apply the same non-leniency towards other teams as they do when Xhaka commits such a foul, we would accept it easily. But now people see and feel the difference and that is what makes people angry.

I just say: No problem. It just proves that Untold is right and has been right for a few years. And feeling right makes you feel good.