It is interesting that with the first team seemingly fixed on three at the back, with two full backs helping them, the under 18 side is playing with a back four in a 4-2-3-1 formation – or at least that is how it seemed as they were beating Norwich 3-0.

However there is no sign of any change in the first team, and the latest news is Mustafi and Welbeck have been fully engaged in training and looking fit and ready.  Also there has been a lot of talking up of Iwobi who played for Nigeria this past week and scored twice, including “a stunning solo effort which saw him nutmeg Barcelona’s Javier Mascherano in the process,” according to the Metro.

Our four injured players (Giroud, Mustafi, Holding, Ospina), are all listed as being down for a “late fitness test” or having a “slight doubt”.  However some of the papers are saying Giroud will not make the beach and Holding will be saved for further outings in the League Cup and Europa.

Mr Wenger of course has been doing his best to try and find something interesting to say to a load of inane questions, answering, “Tottenham are a good side but we have the quality to win this game. We have no fear; we are focused on nullifying their strong points and expressing our strong points.

“People always take one situation and the judgement is definite, permanent and forever. But life is movement. It’s down to us to change the opinions of people with our performances.”

As for last season and slipping behind Tottenham for the first time in 243 seasons [I think the maths is slightly out there – Tony] Mr W said, “It was a big disappointment to finish outside the top four. It was the first time in the history of the Premier League that a team with 75 points finished outside of top four. I still feel it was very harsh on us. People forget we won the FA Cup in a very stylish way against City in the semi and Chelsea in the final. The overall achievement was quite positive.”

And he also had some good historical comparisons to offer concerning the latest media and bloggetta hysterics:  “It’s the kind of remarks you get for 20 years.  In 2002 and 2003, it was, ‘Will Robert Pires be tough enough?’ He scored most goals in derbies. A football player has to be efficient. Tough or not tough doesn’t matter.”

As for the wide range of interviews Lee Dixon has been doing to promote his new movie, and his throwing out a lot of comments about the current team, in order to ensure he got the coverage, Mr Wenger said, “Lee Dixon is a passionate guy so in his response he is passionate as well.  I think if that was the only way to feel football games, you would say to people, ‘If you don’t win the game you are killed after it. You are executed’. Putting people up against the wall is not the only way. It’s a mixture between urgency and confidence, relaxed and tense. That is different for every individual and every team. You have to adapt your speech to the mental state of the team and the individual.”

Now I must say this approach of killing off players who lose matches might have something going for it.  Indeed I think in parts of South America they already do it.  But maybe we should start with using the firing squad only after two defeats – just to give everyone a chance.

As for the ref – well, you probably have read the preview (there’s a link below if not).  He gives out on average 3.75 cards per game, so I suspect he will go over average today and give out six or seven to Arsenal.  Tottenham get fewer cards than Arsenal – 13 to Tottenham and 15 to Arsenal, but Tottenham have had one man sent off.  With this ref they will be safe.

But perhaps the most interesting stats came this week from oulalal 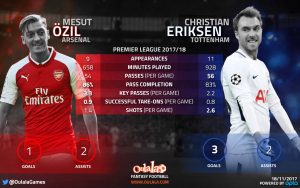 Eriksen beats Ozil on shots but not much else no matter what is measured – except he has one more shot per game.  You wouldn’t know that from the publicity or the day to day chit chat. 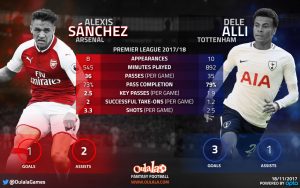 Alexis is down on pass completion, but nothing else. 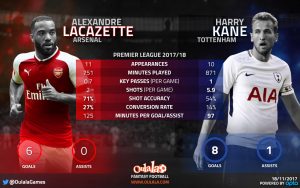 Lacazette takes fewer shots but is far more accurate when he does.  I find that rather interesting.

Well…  since you ask, I am going for the fairly obvious

I don’t think I’ll enjoy it; I just want us to win.

PS: I am sorry to say we won’t have much of a coverage for the rest of the day.  Walter has a family event which will keep him from the usual post-match write up, Blacksheep’s on holiday, and the rest of us are going to be in London, and thus a long way from home in the East Midlands.  Tony says he might get something published before going dancing, but don’t bank on it.

112 Replies to “Arsenal v Tottenham: The teams, and the need to kill off under performing players”