Last night a number of fans from the more positive of the Arsenal supporters groups were invited to the Emirates Stadium for our first meeting with Unai Emery.

It turned out to be a really solid performance by the manager who, I think, impressed many of us by a willingness to speak in English despite it being obvious that he is as yet far from proficient in the language.   Indeed the fact that he stood in front of several hundred fans and spoke without hiding behind a translator speaks volumes for the man and contrasts enormously with the performance of some other managers such as Mauricio Pochettino who utterly refused to talk in English for a very long time. 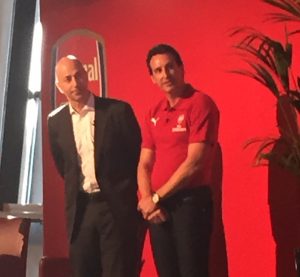 The event, held in the Royal Oak suite at the Emirates thankfully had none of the disgraceful English media present, which allowed a much wider discussion of the direction the club was taking, the challenge of integrating new ideas with the traditions of Arsenal, and assurances that the club has the staff and organisation to take up this challenge.

Mr Emery spoke of his positive initial meetings with the players who are not away at the World Cup and his appreciation at the level of organisation and support that is available to him.  His promise was that he would work “hard, hard, hard” to make things work and to be the best.

He also answered questions, which given his lack of English was a brave move which he handled well, including one where it was put to him that he had said he preferred to win 5-4 rather than 1-0, and he confirmed that philosophy.  Although he did make the point that this was a comment that he had made some 20 years ago, and that 5-0 was the best scoreline of all.  Quite where that left the singing of “1-0 to the Arsenal” was left for the audience to work out.

Mr Emery then made the point that he always had four equally important reference markers in his approach to football – the organisation of the club, the team, the media and the fans.   One can only hope that the backroom staff has warned him as to what the English media is like in general, and like in relation to Arsenal in particular – but he did make particular reference to his central desire to make the fans happy.  Inevitably that went down well.

Beyond this a recurring theme was the strength of the background team that is working alongside the manger with Sven Mislintat’s name coming up repeatedly.  It all seemed a very long was from that comment in the Independent just five and a half weeks ago that, “Only the make-up of Mikel Arteta’s backroom team stands between the 36-year-old and the Arsenal manager’s job. ”

Ivan Gazidis also spoke emphasising again what we have all realised – that the way Arsenal signs players has changed and is now a collective effort, starting from the initial identifying of the needs of the team and running all the way through to the agreement with the selling club, through the signing of the contract, and the integration of the player into the Arsenal way of doing things.

In terms of transfers we were told that, “there will be more to come and some layers will leave us,” but it was also made clear that the approach will be based around the needs that the new manager has identified.

There was also realism in the speeches, particularly from Ivan Gazidis, who said that we have to accept that there will be set backs along the way, while making the point that developing players is part of our history.

But perhaps most impressive was the amount of time Unai Emery spent stressing that he wanted to understand the club and its values and traditions – including the tradition of developing players that Arsenal has established over the years.

Taking up this point Ivan Gazidis emphasised the work that had been done on the Academy, and how the work of London Colney had been transformed with over 40 staff now working there on player development, as well as the club focusing on the constant desire to bring in world class people at all levels.

But perhaps above all in Ivan Gazidis comments was the recurring thought that the club does so much that we as supporters should all be proud of but which is not recognised (he implied by the media but did not mention this).  He was not suggesting the club is perfect but was clearly taking a swipe at the endless knocking of the club that has become a fundamentl part of the commentary in English football.

During the questions from the floor session there was also talk about the match day experience and the issue of empty seats, and confirmation that the club was looking into this.  Judging by the reaction I suspect that the belief in the club is that when the team is playing well everyone will turn up.  There doesn’t seem to be a view that the club can or indeed should do anything about people who pay for season tickets but then don’t attend.  And indeed I can sympathise with this: a person who is suddenly taken ill and misses half a season as a result hardly wants to be reminded during the course of that, that his/her season ticket could be rescinded.  Likewise I don’t want to lose mine just because I go to Australia each year for a few weeks to see my daughter.  There was however a promise that women’s games will be played at the Emirates, although no details were given as to how this would be arranged or when it would start.

Surprisingly standing received a very favourable reception from Mr Gazidis.  It seems that parts of the ground can be transformed for this, if the governmental go-ahead is given – but he warned that there are those in government who want to use safe standing as a way of legislating that everyone not in a standing area is then absolutely required to sit.   There were also appeals from disabled supporters that they should have places within safe standing areas: it will prove quite a challenge as and when the legislation is passed but the club seems very confident that the Ems can be adapted.

Indeed visiting the ground last night revealed just how much work is going on there – scaffolding and barriers are the theme of the day.  Hopefully all will be removed by August.

It was a good night and we even got a free pie and pint (or in my case, glass of the red).  All rather well done I thought.