Recently Walter Broeckx, Untold’s regular correspondent and chair of Arsenal Belgium was invited by Arsenal to look around London Colney.

The first parts of his reports appeared here

Another major improvement that came as a result of a request from Wenger was the use of virtual reality. People maybe have seen the special equipment that is now used to put a player in the middle of a computer game. Arsenal uses a similar system to improve the players and their decision making.

So now apart from the official TV camera’s there are also special cameras in the Emirates. More than 40 in fact. They cover the whole field all the time and every player is constantly in the viewing point of a camera. The computer and statistic department from Arsenal transform all those images in to a virtual reality game. Although it is a most serious game.

Let us say a defender has not followed his teammates and thus has played a player onside that scored against the Arsenal. So the next Tuesday when the computers have done their job the player puts on his glasses and sees more or less through his own eyes from the position he had on the field. As the software can stop the game he can try to learn from this by looking around him and see what went wrong, when it went wrong and how he could have done better by looking left, right or whatever direction that was needed to make him realise he had to move up with the rest of his defenders.

Compare this with the pre-match preparations that were used when Wenger arrived at Arsenal and you can see that this is from another planet. And the most important person to have changed all this is Wenger. His legacy will live on for many, many years at Arsenal.

Our guide Sean, speaking about this, said that it was a really hard blow to take when they found out that Wenger was going at the end of last season. Almost nobody at the club had seen another manager while working for Arsenal. But Wenger’s work will still continue even now he has gone.

As was mentioned before our new coach is still working and embraces the technology that Wenger asked for and uses it completely. 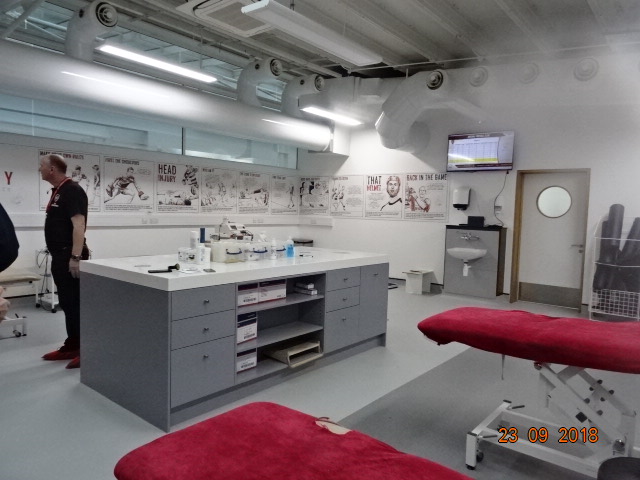 One of the medical rooms

An interesting story about this medical room is that this is the room where injured players get their treatment, massages and see the doctors and specialists they work with, on their road to recovery. Now you can see, above, that it is a very bright room but the players that come there are mostly not in good spirit. An injured player is a player who is down most of the time. He can’t do what he wants to do and sometimes the road to recovery is hard and long.

So now on the walls they have put up the injury story of Petr Cech during his career. And as we know Petr had a very serious even possible deadly injury some 10 years ago. He recovered to become one of the best keepers in the world.

Last year they story of Per Mertesacker and his recovery to play in the final match of the season at Wembley to win the FA Cup with Holding as his partner was in place there. Arsenal use these to show the injured players that even though they are injured now they just have to take an example of how Per or Petr worked hard to recover and that at the end you can get a great result.

I know that these days it is the norm to have a go at Gazidis and Kroenke. But again I feel we have to give them some credit.   It was Wenger who was asking for the money to get these innovations made, but at the end of the day Gazidis and of course Kroenke had to agree with spending so much money on this side of the club.

That money that was spent didn’t have a immediate impact and indeed it is only now we get to see the real benefit of the whole system by having fewer players injured compared to before and to having them healed quicker than in the past. That is also down to Wenger demanding more and better performances from his medical staff which led to these changes over the years.

Indeed, Wenger was never afraid to look beyond football. If Arsenal could learn something from rugby we did. Be it basketball, American football, hell even it would have been darts… if they used things that could improve the fitness levels of our players we would introduce it.

In the performance centre we have a whole new fitness hall. Where players are constantly monitored with their technical equipment but also from the many windows there are around by physiotherapists, doctors, coaches…. Every player has their individual training scheme as some need more training than others and some need to be kept back in training to make sure they play better during the matches.
No player does the same during the whole week. On the field they do more or less the same but when working in the fitness hall it is all individual work.

In the final episode in the series Walter looks at the work with the under 23s and under 18s.

From the Arsenal History Society

3 Replies to “Arsenal training centre: virtual reality and tales of past recoveries”