I don’t get to see that many under 23 games since every Arsenal first team home match involves a 175 mile round trip in the car, plus a train journey at the end, but when the game is not too far away and there’s someone else to go with then yes, I will go. 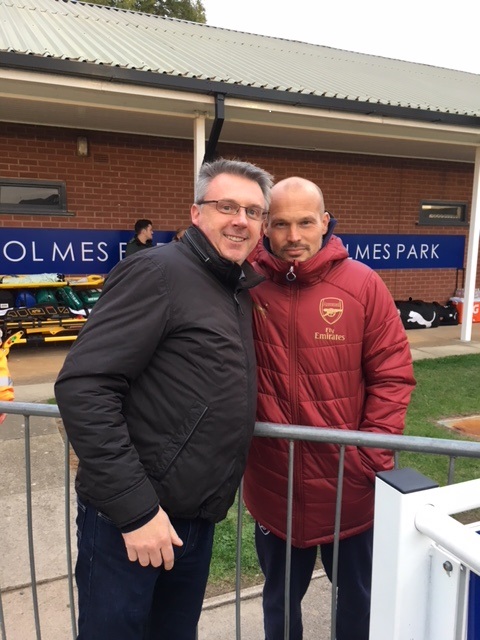 And I’m glad I do each time – just like last night.  It’s a chance to see a new ground, and to try and pick the youngsters who might well be about to make the breakthrough, and something always happens.  This time we met Freddie.

He was standing with a few of the Arsenal staff chatting and laughing, Ian asked one of the charming ladies standing at the barrier that stopped us mere mortals from going into their section if she could ask if he could spare a moment, and instantly he did.

Freddie doesn’t look too happy here, but I can assure you he was as charming and polite to us mere mortals as were Per Mertesacker and Tony Adams at the Coventry game we went to.  Of course they need their privacy too, but they do recognise that the game needs the fans just as it needs the players.

Which might sound obvious, but believe me it was not always thus.  This really was a lovely start to the evening.

Holmes Park is the home of Leicestershire and Rutland FA, and it is used as a training ground for the county in promoting youth football and of course for social events and the like.  Plus it is used by Leicester City for their under 23 games.

There’s a stand along one side, and standing room behind each goal.  Exactly the sort of thing needed for these under 23 games that sadly don’t get too big a crowd.  Which is odd because the quality of the footie really is extraordinary.  In terms of skill level, far above League One.

As to the game which we won 1-2, the first thing we noticed was that the cost for me to go in was £1.  Outrageous!   Actually I don’t think I have ever paid one pound to go into a game before, except perhaps as a teenager.  Ian being of a younger vintage than I, was forced to fork out £3.   He kindly then said that he would pay the pound for me, if I bought the drinks.  I think I lost out there.

But there’s a bar, a range of beers, the usual football food plus a few other interesting things that you don’t normally see like cake, and it’s a pleasant enough place to sit.

Programmes of course are just one sheet, but they are kindly brought around and given all – all very civilised – and thus we found out that none of the star young men of the under 23s were playing. My guess is that they are all boarding the flight to foreign parts to be in the Europa squad.

OK, so a disappointment, but we got a chance to see the rest:

To me the game seem to go in distinct stages; a lot of Leicester pressure, Arsenal soaking it up, then suddenly Arsenal turned it on, and continuing like that.  The difference being that Leicester flattered to deceive with their attacks, we just kept on keeping on.

Tobi Omole scored on 20 minutes from a free kick routine.  Burton knocked the ball in, Omole finished it.  Cue respectful applause from the couple of dozen or so Arsenal fans around the ground.  (You get to know your place in things when you are outnumbered about 100 to one.

Then it was all Leicester, they made it 1-1 before half time and carried on with the pressure game there after.  But of course (especially at this level) eventually the energy dropped a little, Arsenal saw it happen and came back on the attack.  Bola was obviously fouled in the box (no one could argue with it) and Leicester went for a Burton.   Ho ho (sorry, very old joke).

Elsewhere Everton beat West Ham 2-1, and with Manchester City and Chelsea not playing we move up to second.

A splendid evening was had by all, and how lovely to have only a half our journey back home!