There is no doubt that a lot of readers who are critical both of Arsenal and of my approach to Arsenal, argue that it is dead simple to predict Arsenal’s results because the manager is a turnip who insists on playing players such as Mustafi, Lichsteiner, Jenkinson, Kolasinac, Elneny, Mkhitaryan, Ozil, Xhaka and Iwobi.

And it has struck me that since we know well in advance pretty much who is going to be in the team (because as the critics also say, he simply doesn’t spring surprises and tends to use the same players over and over again) it really ought to be possible to make pretty neat predictions match after match.

Now, if you add to this the Untold prediction programme that we have been running all season, through which particular emphasis is given to the home or away record of Arsenal, and that of the other team, you really should be onto a winner.

As you may recall Untold runs the home and away analysis before each match – but if you can’t wait for that, you can always take a look at the authorative site 11v11 which has a section of its own devoted to Arsenal which can be modified to show just home or just away games.

And then if you wish you could go further by this chart to show what happens to bets made in particular ways.   That was provided to us by Betway.   You can also find out what is happening across all of football. 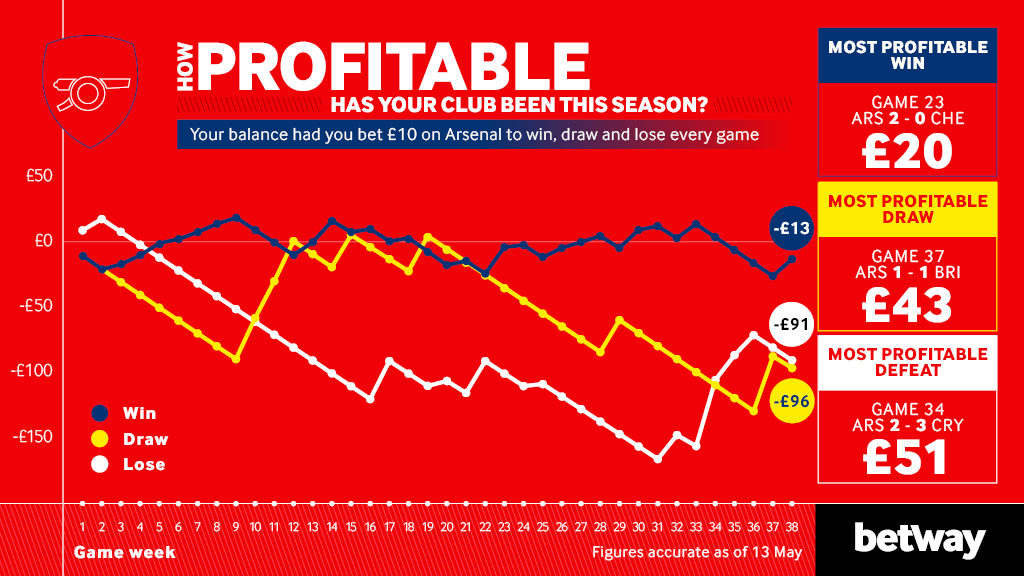 Finally if you want to see how far Arsenal has progressed in the last season, what you can also do is have a good look at the position of Arsenal in the season just finished against that of previous seasons, which were, of course, under Mr Wenger.    The full details of this are in the article How did Emery compare with Wenger? A comparison of seasons

Now that page contained a chart that you maybe missed amidst all the data that was included, so I want to run it out one more time.  It concerns the away form of the club.   Here are the details…

Now my estimation, based on all the away games that we have looked at, is that it is going to be very clear very quickly whether we are breaking the away game curse in the new season or not.   If we are not that is going to give good indication of what is going to happen in the next season in terms of Arsenal’s away form.

Home form incidentally is much easier to forecast so I am not bothering you with that, but it is the away form that people often ignore.

But remember that was just five matches, with just three in the league, and two of those were against teams that were ultimately relegated.   For the spell on away games to be broken we need a much bigger turn around that that.