The quote in the title was from a Chelsea supporter to me in the Gents after the game and he wasn’t wrong.  The trophy went to Chelsea following a 2 – 1 win in a game which saw Arsenal batter Chelsea for 80 minutes.

The match as you would expect was between two of the top three Women’s teams in the Country.  Chelsea, Man City and ourselves are by a distance the best at the moment as we have been for the last few years.

This Cup is the Women’s version of the League Cup and was open to all 22 teams from the top two tiers of the Women’s game.  The competition is initially played as a round-robin within four groups of either five or six teams with the top two from each group going into a second knockout stage.

It started in late September with a 5 – 0 win against London City Lionesses who play in the second tier.  We continued with wins against fellow second-tier teams Charlton 4 – 0 and London Bees 9 – 0 and a win against WSL side Bristol 7 – 0.  The only points we dropped were against Brighton where we could only manage a 0 – 0 draw in normal time and then lost the penalty shoot-out for the extra point.  We topped the group and qualified for the last eight knockout stage.

In the quarter-final, we beat WSL team Reading 1 – 0 and then in the semi-final beat Man City by 2 – 1 reaching the final yet again.

Chelsea were our opponents and reached the final with a trouble-free run proving too strong for Manchester United in the semi-final.

Chelsea are something of a ‘bogey’ team for us and we had lost in our last four games against them in all competitions including home and away in the WSL this year.

The game was held at Nottingham Forest’s City Ground – now sadly well below the standard one would expect for a prestigious game.  At least the weather relented sufficiently for the match to proceed with the River Trent, which runs past the ground, within its banks.

Match tickets had to be bought from the FA, mine cost £1.00 as a senior citizen but then included a £1.50 charge to print it out at home – taking the piss rather.  Note to the FA: be honest about the price.  A print at home fee is wrong.  Charge the actual cost of £2.50, it’s still cheap and forget the print at home cost.

For transport Arsenal laid on a coach from either the Emirates or South Mimms service station on the M25.  Leaving time from the stadium was 12:15 fro a 17:30 kick-off.  Second Note to the FA why a 17:30 kick-off ensuring that London teams will then be getting back at midnight plus?

Women’s football attracts a lot of families with young children mid-afternoon would have been far preferable to early evening.  With the final almost certain to involve at least one London Club it seemed a strange decision to have taken.  Oh I forgot the FA was the organisation that effectively banned Women’s football for 50 years and they still haven’t really got round to accepting it as a professional game.

I had booked a place in the Arsenal stadium car park and set off early only to realise 15 minutes later I had forgotten my ticket so had to go back home.  That left me with an hour and a half to do a journey that the sat nav said an hour and 20 minutes (not enough wriggle room for a cross London journey) for so I abandoned that plan and went up by train and bus which I knew would get me there on time.  I had remembered, camera, food, drink, paper etc but missed the tickets off my mental check list – Senior moment!

There was only one coach (Chelsea had three) and I met a number of regulars from Borehamwood as well as many new faces.  Each seat on the coach had a blanket on it which we were invited to keep and we were also given branded hat, scarf, water bottle, hand warmers amongst other goodies.  Total shop price was well in excess of the cost of the coach so kudos to the club for looking after our indomitable band.

We had about an hour’s delay between the Stadium and the service station as a traffic accident had blocked two lanes of the three lane dual carriageway but arrived in enough time for the journey up the M1 which, fortunately, was accident-free and flowing steadily.  Not always the case as Tony will attest.

We arrived about an hour before kickoff which gave Gunnersaurus time to put in an appearance outside the stadium.  He has a busy week, Nottingham Saturday, Portsmouth Monday, Borehamwood Tuesday, Visitors from Singapore Wednesday and Thursday, Blackburn with the U23s on Friday and The Emirates on Saturday for the West Ham game.

We were all in the Brian Clough Stand to provide a backdrop for the TV cameras who were with the ‘important people’ on the other side and who were to have a view of the presentations etc unlike us ‘plebs’.

The first thing I noticed when I got into the stadium was how dated it was, insufficient space for spectators to move pass the one food outlet for the upper tier of the stand and totally inadequate toilet arrangements.  On getting to my seat it was also clear that the pitch was more sand than grass around the corner flags and penalty spots and it looked in really poor condition.  It played really slow throughout the game as well with uneven bounce not helped by the strong gusting and cold wind which blew throughout. 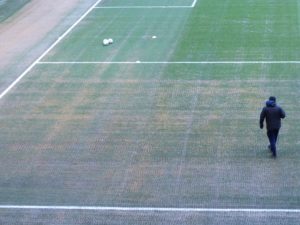 I was also told by the steward that I wouldn’t be allowed to take and photographs during the match.  He was unable to tell me whose rule this was but I was left in no doubt that to disobey would lead to serious consequences.

I have never been told this in all of my years going to matches with my camera so I’m afraid you can’t have any live pictures from the match.  I have some during the buildup and the opening kickoff but nothing else.

Another example of officialdom affecting the fan experience.  I wouldn’t have been using flash as my camera works quite well with floodlighting so couldn’t have affected the players.

With our extensive injury list there was no surprise that Arsenal only named five substitutes, only two of whom were senior players, the latest casualty being Scottish international Jen Beattie who was forced into a 7 day recuperation following a concussion our previous game.

Arsenal kicked off and started OK but not great, Chelsea having the best of the opening exchanges and scoring an early goal through England as we failed to effectively clear our lines giving her the chance to strike from within the 6 yard box.

After that we took control of the game and battered Chelsea who were kept in the game by a string of fine saves by Berger (in my opinion player of the match), some less than clinical finishing and a lot of luck.  No penalty was awarded to Arsenal when one looked nailed on.

Halftime came with only the one goal scored.  The second half followed the pattern of the first with Arsenal camped in the Chelsea half who continued to repel all attacks.  The pressure eventually told with an equaliser from Leah Williamson poking home after Berger had clawed out her header.  Game on with six minutes to go.

In the time added on Chelsea hassled Zinsburger whose hasty clearance spun out for a corner rather than a throw in. and from the resulting attack Chelsea scored a winner – to all of us in the ground England looked offside and no replay was shown on the stadium screens which is normally a sign that things aren’t straightforward.  I still think she was offside by at least half a foot (the foot she scored with).  Make up your own mind at the end of the official highlights video.

Our players can be very proud of the effort they put in in the game and with only a little luck and proper officiating (including VAR which wasn’t available), the result could very well have been different.

It was a great game of football even if the wrong team lifted the trophy and should have attracted a bigger gate than the 6,400 who were there.  How many of you readers knew the match was taking place?

Hopefully the international break will enable some of our injured players to return in time for the run-in where we need to win all of our remaining matches and hope that either Chelsea or Man City drop points for us to have any chance of us retaining our WSL title.  At the moment we are third with only the top two qualifying for Europe next season.  To win the Champions League we will have to beat PSG at the end of March, then (almost certainly) Bayern Munich and Lille (again almost certainly) in the final and as they are the best team in Europe at the moment that looks a very big ask.