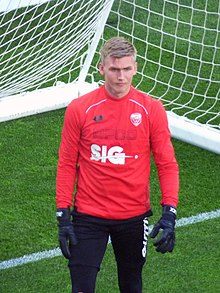 According to the Daily Mail, home of the truth and purveyors of all things real, “Arsenal agree £1.6m deal with Dijon for goalkeeper Runar Alex Rúnarsson with Iceland international due in London for his medical… but why are they interested in a shot-stopper who has let in 61 goals in just 36 Ligue 1 appearances?”

Let’s just check that stat as far as possible.

Rúnarsson was player of the season for FC Nordsjælland in the 2017–18 Danish Superliga which doesn’t sound like he was a bad keeper.   In June 2018, Rúnarsson joined Dijon on a four-year deal. Dijon to be clear are a club that struggle near the foot of the French league.

Meanwhile having previously represented his country at youth level, Rúnarsson was called up to the Iceland senior squad for the 2017 China Cup.  He earned his first senior cap in a friendly against the Czech Republic on 9 November 2017.  In May 2018, he was named in Iceland’s 23-man squad for the 2018 FIFA World Cup in Russia.  He has since played five times for Iceland and 36 games for Dijon.

So that 36 for Dijon accrues with the 36 games cited by the Mail.  On track so far.  But although Iceland are not one of the giants of football, although they have been to the group stages of the 2018 world cup where they and their supporters made quite an impression. Would they be using a useless keeper?

Dijon were promoted to the top league in 2016 and have struggled since then finishing, 11th, 16th twice, and 18th.  Not bad for a club competing way above its normal pay grade.

The Mail don’t tell us which games Rúnarsson played in and I can’t find the details, but assuming he played in all the games last season and this, that makes 42 goals in 31 games for a team that one certainly can call the minnows of the French league, with a goal keeper in his first major campaigns.

That leaves five games unaccounted for in which he would have had to let in 19 goals.  Just under four a game.  No one is providing any evidence of which games these were – it is possible but of course without knowing the details, and with this being the Daily Mail it is right to be sceptical.  Even if true, it is probably a case of a very young and inexperienced keeper playing for a modest team.

Now Harry Slavin in the Mail also tells us, “Mikel Arteta is missing a shot-stopper in his squad after allowing Emiliano Martinez to move to Premier League rivals Aston Villa this week.”

That isn’t actually true since as we pointed out in the article “Should Arsenal be signing more youngsters?”… “We have, as ever, three keepers ready to play in the first team: Leno (age 28), Dejan Iliev (25) and Matt Macey (26).”

The Mail proclaims however “Runarsson, who had made 36 Ligue 1 appearances for his club in which he conceded 61 times, is due in London for a medical on Thursday, ahead of completing the switch.”

OK so far so Daily Mail.  But now the story goes further because it is reported in the Swiss paper “20min” that Rúnar Alex Rúnarsson is notorious for a whole string of wild anti-Wengerian tweets.  If that is true he will be utterly beloved by the Wenger Out movement that persuaded the club to waste over £15m on compensation to staff who were moved out just one year before the end of their contract as part of the departure of Mr Wenger and the arrival of Mr Emery.

“Damn, that guy from Wenger is stupid,”

“Arsene Wenger is a little too stupid,”

And Wenger is, “definitely the dumbest man on this planet” accompanied by the hashtag #frenchf ***,

These alleged tweets have since been allegedly deleted, so we can’t prove or disprove what 20Min are reporting.  After all it might be as big a wind up as 97% of the transfer tales that the Mail print.

So we are left wondering.  Is the transfer story true?  Are the statistics the Mail quote true?  Did the player really write those tweets?   Have the AST / AFTV and BlackScarf gangs all finally got their own representative in the club that they have so long craved?

Or is it once again an example of what, for simplicity’s sake, we might as well just call, “Football journalism”.  Make up the number of goals he has let in.  Make up a load of tweets which are now deleted and so can’t ever be traced.  Who knows, make up a transfer…

The key point is that this does not ever happen to other clubs.  It does however, day by day, happen to Arsenal.

You may, should you wish, ask why is that?