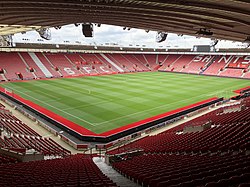 Southampton: how to tackle more, but give away fewer fouls

And so we approach another match, and thus the statistical data that we have been evolving through this season is once more brought into play.

Here we take the activities within a game which are not revealed by the ordinary league table, and compare them for the two teams.   There is a full chart showing all the statistics that we gather at Premier League full stats table: Arsenal move towards abandoning tackling

Southampton are a curious team: one might even think they have an “understanding” with the referees.   They tackle more than any other club in the league, and when it comes to fouls they are nearer the top end of the table than the bottom.

Arsenal are the reverse: hardly any PL side commits fewer tackles and fouls, and yet they have to commit far fewer tackles to get a foul against them, that Southampton.

Which simply means Southampton will enter this game knowing they can assault Arsenal with fouls, but get away with it much more than Arsenal can.  Arsenal absolutely must NOT retaliate.

Although the clubs both have 27 yellow cards, Arsenal get a yellow after 6.62 fouls, while Southampton have to wait until they have committed eight fouls to get a yellow.  Southampton immediately enter the game with a 17% advantage.

On penalties both side are at the lower end of the scale, so a penalty in this game is unlikely.  But overall the refereeing advantage is very much with Southampton.

So both in terms of refereeing and in terms of home and away, Southampton have the advantage.

For Southampton that is 2 wins, 3 draws, 2 defeats.  An equivalent of 1.29 points per game (taking all games as gaining league points).  And one of the games was against Shrewsbury of League One.

Arsenal have played nine games in the same period

That is 5 wins, 2 draws, 2 defeats.  That is 1.88 points per game.  But perhaps most influentially it is the fact of being unbeaten in six, and all the games have been against PL clubs.

So the advantage Southampton have is that they are at home, and they are treated much more leniently by the referees.  Arsenal’s advantage is its recent form.

Indeed if we look at the goals scored and conceded in the last seven games, Southampton have scored four, half of which were against Shrewsbury.  The have conceded three.