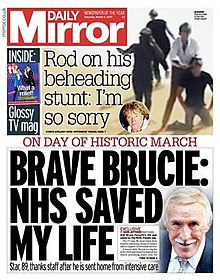 Now I know my name causes some mirth among the lower classes, but if might turn out to be a dire warning.  At least if the Daily Mirror has its way.

For the Daily Mirror has on its site today what appears to be a serious article called “Arsenal keep or sell” in which they look at who should be sold in the next transfer window in the summer.

But adding things up has always been a bit of an Untold Arsenal fetish and what we found was that out according to the Mirror 64% of the 25 man squad should go in the summer.  Here’s the list…

Now can you imagine building a team at the start of next season in which over half of the players are new to the team – and doing that as a way of rising up the table from the middle reaches to the top six.

It would be an utter and total disaster in terms of planning for next season (remembering that quite often a lot players being moved on go at the last minute so you don’t know who you will have left, and how many places that will make available.

But apart from anything else, can you imagine trying to meet the foreign grown rules – and not just because of the need to ensure we don’t exceed the quota, as we did when Ozil had to be shunted into no-mans-land.  We’d have to balance the incomers as well.

Now of course a lot of players would be delighted to be lined up for a chance of fame at Arsenal, but with all these men saying hello to each other for the first time and trying to train together with the season starting with several weeks of the transfer window left, it would be sheer unmitigated chaos.

But there is more.   With players from other clubs thinking about Arsenal, they would take one look at the chaos and say, “not a chance mate”.  No one would want to come into that disaster area with that many players being sold at once.

The piece is written by Experienced Sports Journalist, Daniel Blackham (his capitals and his title, not ours) who according to LinkedIn has professional experience of national and local news desks. Skilled in Teeline Shorthand, Writing, Interviewing, Reporting, and Microsoft Office. Strong media and communication expertise. Qualified with a Gold Standard Diploma in Sports journalism from the National Council for the Training of Journalists.

But do we need all these player changes?  Here is a chart of Arsenal after 27 games in recent seasons.

But of course he had to go.

After him, in terms of the last seven years, came Mr Wenger with two consecutive seasons where we had 51 points after 27 games, but of course he had to go as well.

So we clearly need some changes of personnel in order to recover from seasons this far off the pace after 27 games.  But having moved on Mr Wenger and Mr Emery I am not sure they will do it.

And besides I don’t think Mr Arteta is quite so daft as to contemplate a Mirror style wipe out.  Thank goodness.

6 Replies to “Sell them all! The Daily Mirror’s shocking plan for Arsenal.”