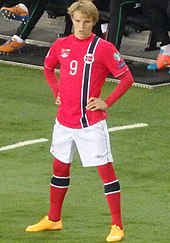 So we’ve signed Martin Odegaard as widely predicted, and the story is still that we are also going to sign Aaron Ramsdale as a back-up goalkeeper.

The initial fee for Martin is reported as being around £30million with a further £4million in add-ons. He won’t be available to play against Chelsea having not got his international clearance.

Prior to Brexit there would have been no delay, for although Norway was not in the EU it was in the EEA EFTA group which effectively meant that on most issues, including freedom of movement and employment, the country was considered in the same way as EU countries.

Now the club has to wait for the FA to agree that he can play in England as one of the 17 foreign grown players in the club’s squad list and for the Foreign, Commonwealth & Development Office of the government to give their permission.  Given that they are currently seemingly a little unsure as to how they should handle issues in Afghanistan’s main airport, that may take a few days.

Martin has declared himself to be a Liverpool supporter, which is a trifle unfortunate, and has in the past stated that his religion is an important element in his life.

He went to Real Madrid in January 2015 and from the start trained with the first team before being loaned to SC Heerenveen,  Vitesse and Real Sociedad for a season each.   However his expected move into the Real Madrid first team was hindered by a knee injury, and eventually he came our way.

Reporters have called him a “modern playmaker” combining dribbling and passing, and of course he comes back to us with a knowledge of how refereeing works in the Premier League, which means that his adjustment period should be a lot less than might otherwise be the case.  All of which makes him seem rather like a young Mesut Özil.

But it is interesting that Mr Arteta has singled out Ødegaard’s work rate, which I have always suspected was a major part of his fall-out with Özil.  Although David Nielsen, his manager at Strømsgodset, compared Ødegaard to Lionel Messi.   His father once said, “We have worked a lot on bringing the ball closely to his feet, so he can change direction quickly, so even if he’s physically weaker than the others he doesn’t get caught because he’s able to get away.”

Here are his numbers…

Back to the league situation, we do now at least know what the Friday selection was all about.  Arsenal were without Pierre-Emerick Aubameyang, Alexandre Lacazette, Willian and Alex Rúnarsson – all of whom had tested positive for Covid.

Mr Arteta has stated that he was surprised that the game was not called off. “But the regulators decided that the best thing to do was to to play the game.”   It does seem a rather curious decision, but then Arsenal are quite used to curious decisions, so, no point in making a fuss.

But he also did say in relation to the squad that, “Most of them are double vaccinated.   Others have one vaccine. We are trying to encourage them to get vaccinated because they are going to protect themselves, their families and the environment around the club, but it is a really personal matter.”

He also seemingly spoke of the media, although he did not use that word, saying “I know the people who have intentions to bury us, to try to criticise us. We are not interested in that. We have a lot of positives, a lot of new energy that is coming up. My full focus is on that and finding a way to beat Chelsea.”

If it wasn’t the media that he spoke about, it is difficult to know who he meant.   If it was the media, then obviously that included all the people whose negative comments about Arsenal we have been noting over the summer and into this new season.

Personally, I’m delighted he’s aware of that, for that means the club probably has a unit working with the players to explain what the media and many bloggers are doing and the way in which gaslighting techniques (originally a form of personal abuse but now well known to propagandists the world over) are being used against Arsenal.

So by and large, good news all round.

7 Replies to “Martin Odegaard and the covid situation at Arsenal”