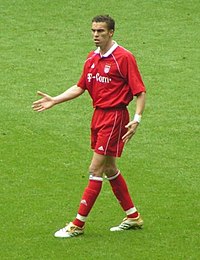 As you might expect our record with West Bromwich Albion across the last 10 years or so (since the start of 2011/12) is quite good.  We have played them 18 times – 17 in the league and once in the League Cup.  That league cup game was a draw, as shown below, with the game going to penalties.  There WBA scored the first three and missing the next two, while Arsenal scored four and had the shot by Gnabry saved.  So we went through.   The gentleman on the left is their manager in his playing days.

Since March 2011 in the League we have beaten them 12 times, drawn three, and lost two.  Both defeats however were at their ground.  Details are given below.

Their manager is Valérien Ismaël (above) who was the senior manager at 1. FC Nürnberg, Wolfsburg and LASK.  So he was new to English football last year, getting Barnsley into the play offs.

The other side in the fixture was Renton, who by beating West Bromwich were Football League Champions of the world!  Interestingly Tottenham Hots played in the competition once, and lost to Heart of Midlothian in 1902.

Anyway, to follow up on Renton who are more interesting than Tottenham (in that Renton won the Football World Championship and Tottenham didn’t), Renton were founder members of the Scottish Football League in 1890, but were expelled soon after for breaching the regulations.  They came back for another go in 1891 but then resigned in 1897 playing in minor leagues before finally going down for good in a few years later.

Anyway, West Bromwich did win the First Division in 1920, and have won the second division three times, and indeed the third tier play offs in 1993.   They have also won the FA Cup five times, the last being in 1968.

Part of their problem is that they continue to play in what is very much a second tier ground, which has a capacity of only 26,688.  There is money in the ownership: the majority shareholder is Lai Guochuan who is reportedly worth over £2bn, but he seems to have little daily involvement in the club.   There has been talk about extending the capacity of  the ground but this has been on hold for a long time, and the truth seems to be there is not that much demand, except when they play Aston Villa (which of course they don’t this season, since WBA  were relegated last season).

One Reply to “West Bromwich v Arsenal: head to head and the history”