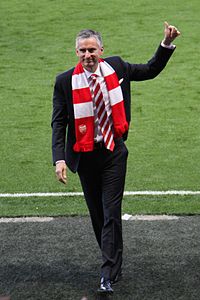 There is something of an oddity with Arsenal.

During the Wengerian days there was a cry from parts of the ground saying “spend some fucking money”.  Mr Wenger would smile and carry on as before.

Indeed he would often say that if he was given unlimited funds he give it back, preferring to develop youth players who played his way.

But now we do have a manager who is willing to spend, and he has done so, although the value of Arsenal’s team is still way below that of the state run Manchester City.

Below are figures based on the work of Football Observatory and these show how Manchester City and Manchester United are on their way to building squads that are worth double the squad value of Arsenal and Tottenham.  The next transfer window will undoubtedly take Man C over that level.

The value figures are based on the work of Football Observatory and shows how Manchester City and Manchester United are on their way to building squads that are worth double the squad value of Arsenal and Tottenham.  The next transfer window will undoubtedly take Man C over that level.

And do remember that these figures come after Arsenal’s record spending transfer window, although Arsenal have suffered by changing managers twice, with managers buying players they see as fit for purpose and selling off the rest, often at a loss.

But interestingly the squads above are all similar when it comes to the number of home grown players in them.  Home growners are rare and so cost considerably more – which is why clubs spend so much growing their own, as it were.

And here we can see Arsenal’s success as they do have is the youngest squad with an average age 2.4 years below that of Manchester City.   Mr Wenger’s teams were also built around bringing youngsters through, and it looks like we are having success doing the same.  Our squad includes…

Looking at things a different way, when we compare our squad value with that of clubs below us we can see quite a gap.   Aston Villa for example have a squad worth €M305 – under half the value of Arsenal’s squad.  Wolverhampton has a squad worth €M309 – but as we have previously seen, were reduced to borrowing money guaranteed by their TV revenue, during the lock downs.  Growing-their-own is going to be their only way out.

Another club with problems is Southampton who like others of late have sold their stadium – their squad is valued at just €M200.

Of course this is the sort of analysis that most websites don’t go in for.  The website HITC, for example this summer ran stories about over 50 players who were said to be coming to Arsenal.  As we know only six arrived.

That ought to be hugely embarrassing for the site – although instead of apologising for covering all these non-stories they yesterday launched another attack under the headline, “£22M MASTERCLASS: CRYSTAL PALACE HAVE JUST MADE ARSENAL LOOK SILLY.”  (Their capitals).

This was a piece by Billy Meyers, who ought to know a thing or two about looking silly because he recently authored a story about Serge Aurier joining Arsenal, as the site complained that Arsenal, having spent record amounts didn’t hijack two Palace purchases.

Of course men who reach 25+ goals a season are lauded; that’s easy journalism.  But that approach is much more dangerous than having a multiplicity of players on 10 each, because a) the top player might get injured (and remember we play in front of the PGMO), and b) everyone else will be trying to buy him – and Man City, Chelsea and PSG will continue to scoop up anyone they want.

Indeed when we come onto the issue of who is the referee for the next game against Norwich and who is running VAR, you will realise just how vulnerable to refereeing Arsenal now is.

But that is for a piece closer to next weekend.

4 Replies to “Which squad has cost the most, and which players did Arsenal miss out on?”