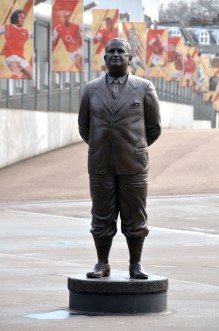 Following my piece about media coverage this morning, I stumbled across another Mail article from the same writer as before which says, “Mikel Arteta would finally appear to be moving Arsenal forwards. It has taken a while and his team are still short of where they need to be, but there are signs of progress.”

And I was interested in the use of the word “finally.”   It implies that he is getting there, but it has taken the manager a devil of a long time – with the additional suggestion that anyone else (such as the author, Mr Ladyman), would have done the job in half the time.

So how is Mr Arteta actually doing?

Only four managers in the entire history of Woolwich Arsenal, The Arsenal and Arsenal FC have managed over 50 games and won over 50% of those games.  Arsène Wenger, Unai Emery, Mikel Arteta and Harry Bradshaw.

You’ll know that only two of those four won anything: Arsène Wenger picked up seven FA Cups and three league titles, and Mikel Arteta won the FA Cup.  Here they are in win percentage order…

So on the basis of win percentage, Mr Arteta is our third best manager ever.    This makes Mr Ladyman’s commentary about the manager finally appearing “to be moving Arsenal forwards,” just a little short of mindless tripe and utter gibberish.  So, about normal for a journalist.

For apart from those numbers above, and the fact of an FA Cup in his first half-season, Mr Arteta figures in the table above as one of only four managers with a win percentage record of over 50%.  That’s stunning considering that in the first third of last season we had a win rate of under 29%!!!

In fact our win rate for the last two-thirds of last season was 58%.

This season, despite those three defeats at the start of the campaign, Mr Aretea is just under 54% – so gradually creeping up to Mr Wenger’s average of 57.25%.

Of course our prime target is to get back into the Champions League next season, so the question arises are we on course for that?

At our present rate of play we’ll end up with 67 points.  Does that normally qualify for fourth?  The table below shows the finishing position of the team that came in fourth each season.

As you can see, only three times out of the last ten seasons has 67 or less been good enough to get fourth.    On average the fourth-placed team picks up at least 71 points.

This means that we need 48 more points this season to make it to that magic number (which of course doesn’t guarantee a place, but makes it much more likely that we’ll get into the Champions League again.)

Now we have 25 games left in the league offering a maximum of 75 points.  What we need is something like 13 wins, nine draws and three defeats.  Or better.

If we were to assume we will lose again to Liverpool, Manchester City and Chelsea, those are our three defeats, and we don’t really want to lose any other games.

But consider this.   Let’s look at our average through this season.

We need 1.82 points per game to stand a good chance of coming fourth.  Measured across the whole season to date we are not going to get it, but measured by what we have achieved in both the last 10 and the last six games, there is a very strong fighting chance.

It certainly looks possible on the basis of the last six games, and the last 10 games.  I’m hopeful.

2 Replies to “Arsenal back in the Champions League next season? It’s looking likely.”