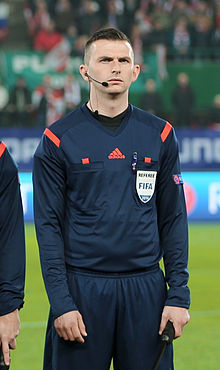 Half of the referees who took Arsenal games last season, have had an Arsenal game this season.

The man who took control of five Arsenal games last season and awarded more fouls against Arsenal per game than any other referee has already had four Arsenal games this season.  At this rate he will end the season having overseen 12 Arsenal games – around one third of all our matches.

And let me repeat he is the man who awarded more fouls against Arsenal per game than any other referee!

Of the seven referees whom we have seen this season, five have delivered pretty much the same number of yellow cards against Arsenal this season as they did last season.   Only two have changed their tune – Pawson and Moss.

Here are the figures…

So let us take Michael Oliver, the man whom PGMO seem to want to control far more Arsenal games than any other referee.  He averaged out 11.60 fouls against Arsenal per game last season.  This season it is 10.00 per game.

That’s pretty close and we might ask, what are the chances of that?  Is it really true that Arsenal foul at the same level in every game no matter what – always clocking up around ten or eleven fouls per game?

Certainly that is what the Oliver figures show.  And yet compare this with Jonathan Moss.

Fouling is something that the teams and their managers control.  Some teams are maniacs on the pitch (such as Watford with 161 fouls this season compared to Arsenal’s 112).  But the level of fouling does vary per game..

Now consider Atkinson.  Last season across four games it was 7.75 fouls a game.  He’s don’t one game this season and it came in at… seven fouls against Arsenal.

If these figures are a truthful reflection on reality we are being asked to believe that one game Arsenal will commit five fouls while in another in the first third of the same season, it is 15!!!

Basically these variations between referee performances makes the whole process of refereeing unbelievable.

If it is not possible to have any consistency between referees then it is really important that we never see the same referee more than twice in a season (once would be an ideal, but I’ll compromise to the European norm and say twice.)

But the thought that we will have Michael Oliver 12 times this season is truly frightening.    He gave us the highest number of fouls against per game across his five games last season, and he is currently working on a rate of ten per game this season.   If the PGMO keep using him at this rate throughout the entire season we will end up having him 14 times and committing 140 fouls all told.

It would be nice if any of the media picked up on the fact that we are looking likely to get the same referee 12 times this season, and ask why.

2 Replies to “Why do we keep getting the referee who always awards fouls against us?”