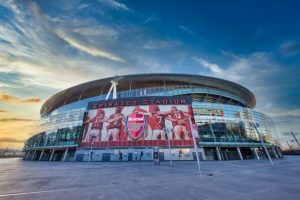 Arsenal FC is a club that is steeped deep in history. The club has gone through many iconic phases in the 135 years since it was established. These phases have produced some of the most exhilarating moments of triumph.

Here are the seven greatest moments in Arsenal history.

Few teams can confidently boast of going through an entire season without losing a single match. The 2003/04 season was a hallmark of Arsenal history. The team went through an incredible run of 26 wins and 12 draws. The team won the title that season with over 90 points and an 11 point margin.

Under the management of Arsene Wenger, the team delighted fans with swift, free-flowing football. Fan and critics aside hailed the team as the invincibles. The team swept most of the prizes that season, including player of the season and top goalscorer, which went to Henry Thiery. Wenger was also voted as the manager of the season.

The little-known Frenchman officially took up his role as manager on October 1, 1996. When he arrived at Highbury that fall, many fans did not know what to make of Arsene Wenger. However, he managed to win the hearts and minds of both players and fans and led the club to dizzying heights of success.

Wenger’s most outstanding achievement was the glorious unbeaten season of 2003/04, resulting in the longest streak of 49 unbeaten games. He is also ranked as one of the greatest Arsenal managers of all time.

Wenger brought joy to fans. He is also considered the transfer king because of his ability to buy or sell players. For instance, he signed Nicholas Anelka from PSG at a relatively cheap price and later sold him to Real Madrid at a whopping 22 million.

Few could anticipate the impact of the 22-year-old Thierry Henry that Arsenal signed in August 1999. Arsene Wenger brought him in from Juventus for £11m, marking the start of an illustrious career for Henry.

Wenger had worked with Henry at Monaco and realized that Henry had blistering pace, excellent dribbling, and ball control skills. He moved him from the wing and pushed him into a more central role as a striker, which paid off well for the team.

Henry went on to score 39 goals during their unbeaten run. He is ranked as Arsenal’s all-time top scorer with 228 goals to his name.

Of the countless goals scored in the Premier League, Bergkamp’s goal is ranked as one of the best goals in history. The goal scored against Newcastle Utd in the 2001/02 season amazed both supporters and critics alike. To date, there is still speculation whether Bergkamp actually meant to score that goal or it was just a lucky break.

That afternoon, Bergkamp’s wonder goal summed up the flair, brilliance, and impact the dutchman had on Arsenal during his 11-year stint at the club. Bergkamp’s goal was voted the best goal of the Premier League era by fans, and 20 years later, it still stands out.

Some of the most glorious moments for Arsenal have happened at the Emirates Stadium. Arsenal moved to Emirates in 2006 after spending 93 years at Highbury stadium.

Emirates is a state-of-art stadium that has a capacity of 60,000. The first game played at the stadium was David Bergkamp’s testimonial match on June 22, 2006. It was befitting to pay tribute to one of their greatest players and start life at the new home.

The Victory for Arsenal over Milan at the San Siro was nothing short of spectacular. It goes down in history as one of the untold arsenal triumphs in the champions league. Coming off the back of a 3-0 defeat at Highbury, Arsenal needed a win to proceed to the tournament’s next stage.

The team has had many glorious moments of success in its 135-year history. These few serve as excellent examples of Arsenal’s dominance in top-flight football.