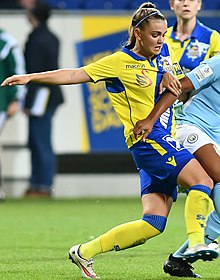 On Wednesday evening 19 January, Covid permitting, our Women’s team enter the Continental Tyres Cup at the quarter final stage.  Due to our involvement in the Champions League group stage we were exempt from the earlier group stage of the competition.  Our opponents are Manchester United so I expect this to be a stern test.

Our recent results have been, to say the least, disappointing.  After our magnificent start to the season, our last five games have given four losses and only a single win.

For me it has been the manner of the defeats that has hurt the most.  In none of them did we ever look confident, our passing has been off with even routine five to ten yard balls being made to opposition players rather than teammates and we haven’t looked anywhere near the way we were playing at the start of the season.  Particularly difficult was the loss to Birmingham City who were bottom of the WSL at the time whilst we were top.  Anyone watching the game would have thought that we were the bottom team so dire was our game.

We now have a chance to get back on track with the Continental Tyres Cup (League Cup) which is a competition we traditionally have a good record in.  Starting in 2011 the competition has only been won by ourselves (5 times), Manchester City (three times) and current holders Chelsea (twice).  We have also been losing finalists on three occasions.

Manchester United qualified second in their group with wins against Everton and Manchester City and draws against Durham and Leicester City.  Manchester City qualified top with the same points but having won all of their matches against teams other than United.  United got an extra point in winning a penalty shootout in one of their two draws.

So the game is first versus third in the table.  Arsenal should start as favourites providing that we play with our usual mojo.

We are boosted by the return of Leah Williamson who is now back training following her lengthy absence with a leg injury.  Mana Iwabuchi is also back with the team after injury.  We have signed three new players during the transfer window as well.

First to arrive was 25 year old Stina Blackstenius who is Swedish and signed from Hacken.  She is a pacy forward and has 22 goals in 72 games for Sweden.  She can play anywhere across the front line but is probably more of a classic number nine rather than a wide forward.  I hope she makes an effective partner to Viv Miedema.

We then signed 23-year-old Austrian defender Laura Wienroither from Hoffenheim (pictured above).  Head Coach Jonas Eidevall has said he sees as more of a right-back than a central defender so she will provide cover and back up to Noelle Maritz

Last to arrive is 30-year-old Brazilian defender Rafaelle Souza who becomes the first female Brazilian at the club.  She is also the only left-footed defender which was a major factor in her signing.

It is possible that Stina may well get some minutes against United, Laura and Rafaelle will probably make the bench but I would be surprised to see either of them on the pitch this week.

The match is at Meadow Park, Borehamwood with a 19:15 kickoff  Tickets are available on the gate or in advance from https://embed.futureticketing.ie/c/arsenal-women/

I will be in the East Stand and will try to post updates at halftime and at the end of the game.

Next up for our Women is a WSL game against Manchester City on Sunday evening in Manchester.  This will not be a repeat of the 5 – 0 drubbing we inflicted on them at Borehamwood early in the season and, whilst I would like to see a win, their recent form and return of a number of injured players marks this game as one where a draw would probably be a decent result.