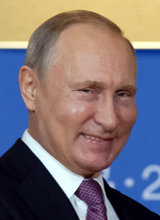 Either each rises up and kicks out its leaders who kowtow with the most appalling despots (Fifa with Russia, and the Committee for Arbitration in Sports, and the Olympics movement with China), or it comes clean and admits it likes doing deals with some of the nastiest people on the planet.

Not surprisingly Gianni Infantino, head of Fifa, has gone out of his way to be the friend of Vladimir Putin. President to President.   “Together we will show the world what we are capable of,” the Fifa president said to Putin as he prepared for the 2018 World Cup finals.  And he went further and further saying that being in Russia made him feel like “a child in a sweet shop”.

So what does Fifa make of the annexation of Crimea, and regular cyber attacks on the free world?   Well the last thing the President of Fifa said on the subject was, “We all fell in love with Russia!”

In Europe this is being described as what it is, the “servile pandering to a despot”.   Both by Fifa for getting into bed with Russia (and the pullout by Uefa of the Champions League final from the Gazprom stadium is far, far too late to be taken as a clear sign of sincerity), and the International Olympic Committee, in its complicity with China.

Banquets, smiles and congratulations – plus loads and loads of money – are what Fifa, the Olympic Committee, and indeed I suspect their allies in the Committee for Arbitration in Sport, want.  Any thought about the way the Uyghurs are being treated in their Chinese concentration camps?  Well, no, that’s not a sporting issue.   Any thought about gettinig into bed with Russia for that world cup?  Nope.

Putin knows he has the overlords of sport in his back pocket and can do anything he wants.  And we can see what that arse rubbing is doing, because the strongest statement that Fifa has come out with so far is that, Fifa wants to “monitor” the situation.

If the FA has the slightest shred of moral decency (which I doubt very much following the way it has behaved in the past) it will once and for all pull out of the Fifa – Russia axis, and say to the rest of football – we don’t deserve this and we don’t need this and we are not going to be part of this.

The head of Fifa now lives in Qatar so that the inquisitors into his activities in Switzerland can no longer get after him (although he says it is to help with the arrangements for the finals!)   That should have been the warning signs to everyone that Fifa has lost its moral compass – although I doubt it ever had one to lose in the first place.

Fifa has taken over African football and put all its nominees in place – discussions in the European media regularly suggest that this is to enable it to run a continent-wide Super League, the model for which it will then export to Europe.  And the IOC has sent out a message saying that there should be no events in Russia.  Essential of course, but the barest minimum, which the IOC is dressing up to look like something big.

A total boycott of Russian sport from football to tiddlywinks (if they play that in Russia) should follow.  This means absolutely not letting Russia participate in the World Cup finals in Qatar.  If they are allowed to compete that means football doesn’t care a toss about an invasion of a sovereign nation.

We do have to remember that Putin has said, “Sport is part of our foreign policy,” and what that means is, investing in international organisations in order to gain influence and create a dependency of the sports upon Russia, through its sponsorship programmes.

Did you know for example that there are a number of world sporting federations that are totally in the hands of Russia.  Shooting (rather obviously) and fencing for example.   The manager of Gazprom,  Alexander Dyukov, has got himself a leading position in Uefa. Of course, our prime concern on this site is with football, but as we’ve tried to show across the years, being an Arsenal supporter does not mean one should switch off from football on the wider stage.  Football in England is far from perfect and many questions remain over the ultra-secretive PGMO and the stranglehold that it has on Premier League football.  That is bad enough, but to allow any involvement by Russia in the future would show yet again that power and money can buy anything in sport.

Infantino has clearly decided to distance himself from Switzerland and the legal cases against him, and is likely to offer Fifa on a plate to anyone willing to cough up the money.   Qatar, Russia, China…  Is English football really going to go along with that?

Football is in the grip of the biggest ever takeover

6 Replies to “Gianni Infantino and President Putin: football must decide whose side it is on.”