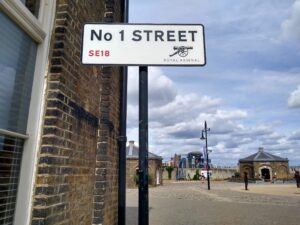 Yesterday, 28 August 2022, members of Arsenal Independent Supporters Association (AISA) made the pilgrimage along the Thames from Embankment Pier to Dial Square, to see the origins of Arsenal FC.

Although of course the original grounds on which Royal Arsenal FC and Woolwich Arsenal FC played are no longer football grounds, Dial Square, where the club was founded and after which it was originally named, has indeed been well preserved and is most certainly worth a visit by any Arsenal fan.

On this occasion, to get there, we took the trip along the river

And let me say straight off, that whether you have an interest in going to Dial Square to see the origins of the club we support, or not, that trip on what is in fact public transport (and therefore reasonably priced at around £7.50) is really worth doing, just for the journey along the Thames.  Make sure you have got plenty of space on your phone or camera – you’ll be taking pictures every 30 seconds! 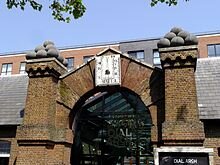 I’ll be putting a record of the trip and more details of what we found, on the AISA Arsenal History Society website but meanwhile I can add that apart from having a wonderful lunch in Dial Square, we did discover the sites of two of Arsenal’s early grounds in the area.

Obviously much has been destroyed over the years since the club that became Arsenal played its opening game (which was an away match on the Isle of Dogs), but the history, has been preserved, largely thanks to the work of AISA.

What we do know is that 1868  not only saw the origin of what became Arsenal FC but also a food-buying association operating which became known as the Royal Arsenal Co-operative Society and which across time grew to having half a million members providing services including funerals, housing, libraries and insurance as well as food.

And in terms of the football, you’ll know that the first match was an away victory to Eastern Wanderers.  Indeed full details of how that game came about are recorded on the AISA Arsenal History Society web site, which with over 3500 articles, is by far the 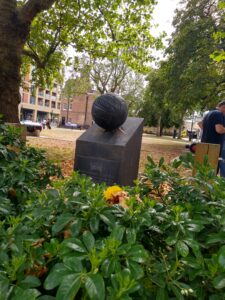 largest and most detailed repository of knowledge on Arsenal’s history.  If you want to get a feel for what we do, do have a look at the links at the foot of this page – or simply go straight to the AISA website.   And what is fascinating is that tucked away within the bushes there is indeed a commemoration of the origin of Arsenal on this site (pictured above right).   I believe AISA will be working with the owners of the site in the near future to make this commemoration more prominent.

I would add that this is typical of the work that AISA does.  Of course the supporters’ group liaises with the club on a regular basis, holds meetings with directors, officials etc, and of course numerous events with past players and officials which members can attend.

But more than that, AISA is committed to making the history of Arsenal totally accessible to all supporters and fans, and of course encouraging more supporters to make the trip to see the place where the club began.

You can read a lot more about Arsenal Independent Supporters Association and our forthcoming events on the AISA website – including of course details with of our regular links with the club.   (You may also like to know that we were the people who came up with the idea of the statues around the stadium and liaised with the club over their development, and we’re also the only UK supporters group to have a banner up at the stadium).

And you can also read more about the history of the club on the AISA Arsenal History Society website.

If you are interested in studying the area for yourself we have provided a map of the area showing all the places of interest – you can reach it through this link….   When you get there just click on the link to make it bigger.

3 Replies to “Pilgramage to Dial Square: where Arsenal FC was founded”