A while ago Goonermikey came up with the stats about how Wenger has overachieved per  £1m of net spend on transfers and how this compared with other EPL clubs over a decade.  And now he has come up with some interesting numbers on yellow cards.

This will make interesting reading for anyone who still does not believe that there is something wrong with the referees in the PL and their behaviour against Arsenal. Of course they could close their eyes once again and ignore the facts because it would shatter their ideal dream world land.

Thinking about the treatment Chambers has received this season, he decided to look at the fouls v cards position.   Figures are accurate up to and including the Everton v QPR game. 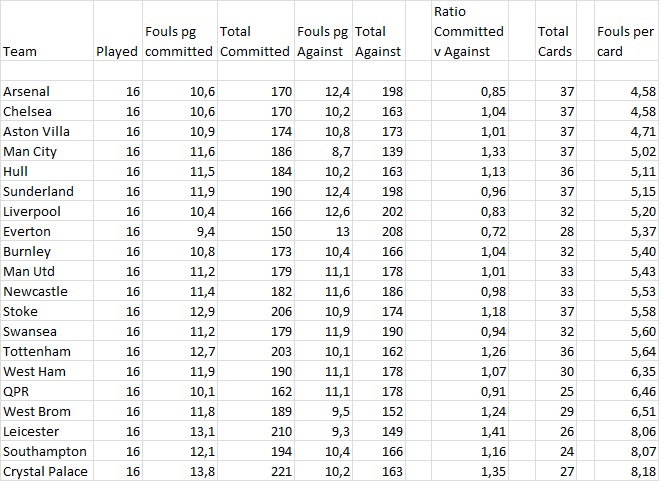 Again some interesting conclusions can be made:

As I said, I know some fouls are worse than others but there’s a big picture here.  That is to say, we don’t commit many fouls (only 15% of teams commit fewer), we are fouled more than most (only 15% are fouled more) and we pick up cards more often than anybody else.  Is it really any wonder Arsenal fans believe the PGMO have an agenda??????

In fact if you look at these stats and compare this with the referee reviews it is in fact a miracle that there still are Arsenal fans out there who discard the influence of refs as irrelevant. But yet these refs punish Arsenal players much more and harder than their opponents.

The conclusion is that there is no level playing field when Arsenal enters the field. They will get carded more than any other team and some players are targeted it seems. Callum Chambers is the prime example. A player who never got a yellow card in his 22 appearances for Southampton now suddenly gets booked every 2 fouls when playing for Arsenal.

Did Chambers suddenly change from being one of the cleanest defenders in to a dirty footballer? I think the only thing that is different between this season and last is that he is wearing another shirt: the Arsenal shirt. And that seems to be a big problem for referees.

Looking at these numbers one might start to think that there is really something rotten with referees in the PL.