As Tony’s Arsenal History article today reminds us, July 24th 1910 was the day Sir Henry Norris took over the club. You can read about Norris and his importance in the Arsenal story here but I’m going to look at what else happened that day. 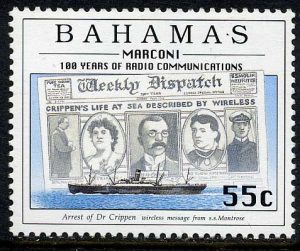 I wrote some time ago that I was writing my own history blog, about the crimes and other incidents that came before the various magistrate (or Police Courts) of London in the nineteenth and early twentieth century. Well I’ve been keeping it up as a daily blog and I now have over 80 posts and a whole variety of crimes and criminals.

It follows the calendar of the year – so today would be the 24 July – but I vary the year. Today I looked at 1910 to see if I could find a suitable case to link with the Arsenal and Norris story. Alas, the news was rather dominated by a huge crime story, perhaps THE largest crime story since Jack the Ripper (in the summer and autumn of 1888).

The story was the flight of ‘Dr’ Crippen and his mistress Ethel le Neve following the discovery of the body of Crippen’s wife, Cora, in their North London home. For those unfamiliar with the tale, Hawley Harvey Crippen was an American born homeopath living and working in England. He had married Cora Turner in New York in 1894 and they had moved to London three years later.

They lived at 39 Hilldrop Crescent, not very far from Highbury, and Cora worked in the music hall. The couple had a poor relationship; Cora criticized and humiliated him in front of his friends and Crippen started an affair with his assistant, Ethel.

In February Cora disappeared and Crippen told people she had died whilst visiting relations back in the States. Ethel soon moved in with Crippen and even began wearing Cora’s clothes and jewelry.

By July 1910 suspicions were raised in England and the USA and the London Police (led by Inspector Walter Dew) started an official investigation. The police searched 39 Hilldrop Crescent but found no evidence of Cora having met a sticky end. Crippen confessed that he’d lied about her death to hide the embarrassment that she had left him for an actor named Bruce Miller.

The police visit unnerved the couple however and they packed their bags and fled to Belgium. Neighbours noticed and alerted Scotland Yard. This time Dew’s men made a more thorough search and they found the remains of a human body, buried under the brick floor of the basement. It was wasn’t easily identifiable as Cora (The head was missing!) but it was enough to start a manhunt.

The hunt for Crippen and Le Neve became a press story par excellence. The pair were tracked to Brussels and Antwerp (where they booked passage on a ship bound for Canada). On July 24 they were heading across the Atlantic as ‘Mr. Robinson and son’, with Ethel disguised as a boy.

The ship, the Montrose, was a slow passage ship, travelling at a mere 12 knots and carrying second and third class passengers. It left Antwerp on the 16 July and due to arrive at Montreal on 30th. Importantly she was also equipped with the new technology of wireless (not WiFi folks, wireless communication).

The ship’s captain, Henry Kendall, was aware of the story of Crippen’s flight and the furore surrounding it; he had read the papers and something about the couple triggered his suspicions. He had his wireless operator send a coded message to London which (according to a report in the Daily Mail) read:

‘Believe Crippen and Le Neve, wanted by London Police, are on board my boat. Passengers give name Mr. Robinson and son. Have definitely ascertained that the ‘son’ is a woman. Watch has been kept. Woman answers exact description of Le Neve. Robinson is clean-shaven, growing beard, with make-up, dressed clerically, but otherwise answer exact description of Crippen. Passengers unaware of identification. Wire instructions.’

Inspector Dew set off immediately by a faster boat and intercepted the Montrose on the St Lawrence river. Crippen and Le Neve were arrested and taken back to London to face trial.

In October 1910 the couple appeared at the Old Bailey. Crippen was convicted of Cora’s murder but Ethel was acquitted of being his accomplice. Dr Crippen was hanged at Pentonville Prison on 23 November 1910.

The evidence against Crippen was very thin. No one has ever proved that the body was that of Cora Crippen nor produced forensic evidence that Crippen murdered her. His defense maintained that she had left with Bruce Miller but she never surfaced to save her ex husband.

I first encountered Dr Crippen as a waxwork in Madame Tussauds ‘Chamber of Horrors’ and have remained fascinated with the case ever since. This probably has something to do with the fact that Hilldrop Crescent is a mere stone’s throw from where I was born and grew up near Tufnell Park and near the new home that Henry Norris found for the Arsenal in 1913.