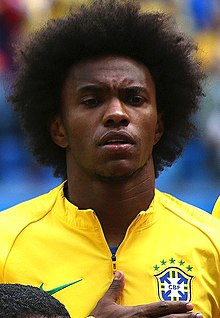 An article in the blog “You are my Arsenal” appeared recently under the title “Winging It: Willian and the definition of insanity”.

It includes the statement early on, “Willian’s performance in 2020 was more than inconsistent; it was non-existent. His lack of meaningful movement; his awkward attacking and defensive positioning; and careless running and lack of intensity held the team back. Often, he was identifiable on the pitch for his mistakes and his level of play.

It goes on in the same way for some time, and because I didn’t see the player that way I decided to take a look at WhoScored,  the site that provides analyses of players.

They show him playing in a variety of positions through the season – right forward, left attacking midfield, left attacking midfield, centre forward and left forward.   Assuming that he was any good in any of these positions, that’s quite an attractive array of appearances, for it suggests he is versatile and can help out when we need an extra man in a variety of places.

But of course that’s no help if he is no good at any of the tasks he is called upon to execute – which is the essence of the article quoted above, as summarised by the statement, “Willian’s performance in 2020 was more than inconsistent; it was non-existent.”

Here’s how Who Scored rated him under “Strengths”

Under “Weaknesses” they had: “Player has no significant weaknesses”

Quite a contrast, but one that gave me rather a sense of relief, because if WhoScored had agreed with Alex Peck I would have had two problems.  One, how come I didn’t see what appears to be such an obvious lack of ability, and much more to the point, how come Mr Arteta didn’t.

What we have to remember here is that Mr Arteta has won the FA Cup as a manager, and this past season undertaken what is for me, the most extraordinary tactical re-working of a club I’ve ever seen.  What’s more it worked, as I have so often reported here.   15th team in the first third of the season, second best team in the last two thirds of the season (as ever, see the Key Data Tables page for details).

So how could Alex Peck in “You are my Arsenal” on the one hand, and “WhoScored” and Mr Arteta see things in such different ways.

I think the issue comes in two forms.  One is with the examples v data.  The article gives examples of individual moments of what the author sees as failures, but it doesn’t seem to gather statistics – data over time, which is what WhoScored bases its view on.

The other is a factor which in my view is common to many articles, be they blogs or newspaper pieces, or radio rants or personal views of ex-players on TV.  The focus is primarily on players, rather than team’s tactics.  Where tactics are mentioned they are passed over quickly, and generally in relation to the single player.

But what I feel we’ve shown this summer in article after article, is that tactics is the key to player performance.  After Christmas Day last year, Arsenal’s team didn’t suddenly start playing well – they began to grasp and feel confident with the new tactic of cutting out tackling – in order to overcome the actions of the referees.   They had been cutting down on tackling from the off, but now they got the whole process working to their benefit.

I won’t go through all the tactical changes that we saw last season, as we’ve been through them all, but the recently added “fouls committed against fouls endured” tactic also summarised on the Key Data page and Which PL clubs foul more than they are fouled? show just how some managers’ thinking has evolved.

If you missed it, you could also take a look at Arsenal’s fouls dropped by 22% last season. Did it help?

So, as the long and rambling series looking at what happened to Arsenal last season draws to a close, ready for us to look at the new season, that is the lesson I take from this.  The focus on individual players, which the media in all its forms indulges in, is itself false.  Of course they are the core of everything, but it is just as important to see how they are used.  For as I hope this summer’s articles show, there are many different ways of playing the game – and many ways of handling the referees.   Just seeing Mr Oliver award an average of 11.6 fouls against Arsenal per game, every game, while Lee Mason awarded three, shows that.

The statistical enquiry of 2021: a selection of highlights