In the world of big sport there have traditionally been four big organisations.  The Olympic Committee, Uefa, Fifa and the Court of Arbitration in Sport

I have written about these bodies quite often on Untold, and indeed just last month finished one such piece with the comment that Fifa is, after all, the organisation that makes the Mafia look like a children’s garden party.

But with the help of friends of Untold in Europe I want to go a little further in this piece, and to start by noting that it has not always been thus.  In fact, the problem really began with João Havelange at the IOC / FIFA who was constantly accused of corruption on a global scale.

In 2011, Havelange resigned from the IOC two days before a scheduled hearing over evidence that he and his associates (for example his son-in-law Ricardo Teixeira) took more than $41 million in kickbacks from contracts awarded to marketing companies.

Indeed in an article in The Independent, he is cited as the Godfather of sporting corruption. In Brazil, at the marriage of his daughter, Lucia Havelange to Ricardo Teixeira (President of the Brazilian Football Confederation CBF and a member of FIFA’s Executive Committee), the notorious mafia boss in Rio de Janeiro, Castor de Andrade was on the Havelange’s family table of honour.

Yet just as Havelange resigned Fifa president Sepp Blatter was already claiming that the report exonerated him (although his critics were already questioning the effectiveness of the investigation).

What Havelange realised, and what some of those who have succeeded him in the in the Olympic Committee, FIFA, UEFA and elsewhere perhaps have also realised was that the companies that were bidding for TV rights and for marketing opportunities in relation to the major football and sports tournaments were, in many parts of the world, open to giving out bribes.   Quickly picking up on the process, organisations grew up that would offer bribes here there and everywhere in order to have their bids accepted and then themselves sell the rights at a massive markup on to more legitimate companies.

Newspapers and broadcasters, by and large, didn’t want to know about this, because the notion that everything was corrupt was liable to bring the value of their investment in the games or tournament down.   After all, who wants to watch a sporting event on TV, when the general consensus is that the event is fixed, or the sale of tickets is subject to corrupt practices?

Indeed when everything from the location of the event through to the franchise for the sale of icecream is subject to corruption there is very little chance that the results of the games are going to be anything other than fixed.

One man followed this through; journalist Andrew Jennings, who sadly passed away on 8 January this year aged 78.  But even his exposes could not stop the secretary and right-hand man of Havelange taking over the show.  That man was Sepp Blatter. 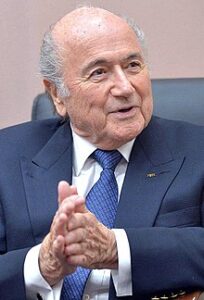 Against them stood one man, a Swedish sports official Lennart Johansson who served as the fifth and, to date, the longest-serving president of Uefa from 1990 until 2007.   In June 1998, he ran for the position of president of Fifa against Sepp Blatter, losing by 111 votes to 80.  The voting was considered by many to be fixed.

And this was a terrible defeat because having seen the corruption in existence during the decades of J.Havelange’s reign as the President of FIFA and having accurately foreseen the extension of the same with S.Blatter, L.Johansson had agreed a deal with the South American Football Confederation (CONMEBOL) that UEFA and CONMEBOL should leave FIFA and set up as a separate organisation that was corruption-free.

In reply Blatter set out to lobby the Arabian and African nations (presumably with offers of what they might get if all went well) and thus the clean party lost.

According to Andrew Jennings’ writing and documents, what has also emerged is that Juan Antonio Samaranch, President of the International Olympic Committee (IOC) from 1980 to 2001, all the time was living in the best suite in the best hotel in Lausanne, with all expenses paid by the Olympic Committee, which was a little embarrassing for the Committee when a picture of him kneeling in front of Franco kissing his hand, started to circulate.

But such was the power of these organisations (IOC, FIFA, UEFA, etc.) that was now taking over international sport and such was the lily-livered approach of the media to criticising anything in international sport for fear of losing their rights for journalist accreditation and broadcasting, that only a handful would take up the cause against corruption.

What Fifa and the Olympic Committee then needed was to have the individual nations that would sign up to “their way of doing things”, so that nothing that was subsequently done would lead to protests.   World cup in the burning heat of an anti-democratic nation with no human rights?  No problem as long as the media is so frightened of losing its broadcast rights, and if everyone who wanted a ticket for an event had to buy it via Fifa or the official Olympic Committee, or its directly nominated agents.

So we have the new arrangements.  You want to stay in a hotel near to a World Cup finals venue? You have to buy your room via a one-man company, set up 30 days before the bid, with no business references, with no financial power, for the sole purpose of getting the rights. In fact, it seems that FIFA sold the exclusive rights for travel and hotel package to the company created for that purpose by S.Blatter’s relative, who then sell the rights at a massive markup on to more legitimate companies. Everything went smoothly. Prices went up by 100%.

Who else is involved in this?  Of course, I don’t know, but the simple fact is wherever you have a monopoly supplier there is the chance of corruption, and what are IOC, FIFA, UEFA, CAS, etc., but monopoly suppliers? …”

Do we actually need monotheistic organisations like the FA to run football in England?  After all, it was the FA that failed to sort out the scandal of child sex abuse in English football.  Nor was it any good at running the Euros final at Wembley.

As for Infantino the Swiss legal authorities are still chasing him and the head of the Swiss legal system who seem to have had meetings together that they shouldn’t have had. And is it not strange that so many people in football are incompetent or plain stupid or corrupt or all three in the same time / all together?

The one thing that helps the forces of law and order is the greed, stupidity and arrogance of those who are involved in corruption.  With this in mind you might fancy a glance back at Switzerland take a greater interest in Fifa – at last.

4 Replies to “Why are so many sports administrators corrupt or incompetent or both?”