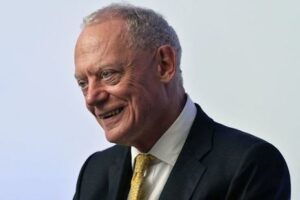 According to an article in the Guardian, the UK government did indeed encourage Premier League to approve Newcastle even though the Prime Minister has said repeatedly that the government had no role in the affair at any point.  Presumably, this was done to increase investment in the UK and to smooth the path to a continuous supply of oil to the UK.

The article also suggests that these efforts by the government to get Saudi Arabia to complete the deal went on across a number of months and were led by the minister for investment, Lord Gerry Grimstone, (pictured above) and were made “despite the government, and Johnson, repeatedly saying publicly that they had no involvement in the takeover talks.”

The newspaper adds that “Grimstone’s work appears to have extended as far as trying to broker a solution to the Saudi piracy of Premier League and other sports TV rights.”

Lord Grimstone is known for having previously provided advice to Saudi Arabia on its policies of buying up assets in the UK – and attracting investment from the middle east is indeed the core of Lord Grimstone’s job.  Indeed it is interesting that the chairman of the Premier League at the time, Gary Hoffman has reported that there was pressure from the government on the League to accept to deal.  Indeed it has been suggested that if the deal did not happen there could be a government enquiry into the running of football.   The government has denied in parliament any involvement in the process saying that all decisions were a matter for the Premier League.

It has been reported widely that the majority of Premier League clubs were against the deal, which would make it impossible for them to compete with Manchester City and Newcastle.  On the other hand the government of the UK has made it clear it welcomes investment from Saudi Arabia and has sought ever closer links with the country despite Saudi Arabia’s atrocious human rights record.

Sadly basic human rights were not at the heart of the worries about Saudi Arabia, but rather it was the country’s continuing involvement in the pirate TV channel Beout TV.  Following the general agreement that Saudi Arabia could buy Newcastle, Beout TV was closed but you can still read its history here.

What makes this affair of particular interest is that throughout the Department of Trade and Industry seemed to be involved in smoothing the path of the buyout, but failed to answer questions on the matter.

For example, there were also reports in the Daily Mail that Eddie Lister, Boris Johnson’s chief strategic adviser at the time was centrally involved in smoothing the path of the negotiations ultimately gaining what it said were, “legally binding assurances that the Kingdom of Saudi Arabia will not control Newcastle United”.  Richard Masters, the league’s chief executive, admitted, “There were conversations with government,” although he added that there was no pressure applied.

Hoffman declined to comment on the matter and instead resigned as the Premier League chairman after the deal with Saudi Arabia was completed.

So what does this mean for football in the longer term?

We already know that Manchester City are benefitting enormously from a seemingly unlimited inward flow of finance from the middle east and that Newcastle will now join them in having effectively unlimited access to money.  We have also seen via the supporters of both clubs that even though some supporters might be disgusted at their club becoming centrally involved with regimes that reject the concept of human rights, there are easily enough fans who will ignore such issues.

Further, as we have seen with the world cup in Qatar the media in England will not seriously engage in any discussion of the morality of taking finance from countries that have no human rights in order to support one or two football clubs.

Thus the subject is effectively removed from debate, and there is every expectation that just as Manchester City is now treated as just another club, albeit one that wins the Premier League rather a lot, Newcastle United will now be held in the same regard.

The only thing that could be done about this would be for the League to institute the tightest possible financial regulations on clubs to make Financial Fair Play work.  Indeed given the independence of the League from control by any other body it could do this.   But for some reason, it doesn’t seem to want to.

Of course, greater involvement by the government in the affairs of football would be good if this involvement meant that fewer clubs would go bust and more clubs were owned by citizens of countries that do not have non-existent human rights.   Unfortunately, neither approach seems to be central to current government thinking.

3 Replies to “UK government increases its active involvement in football, but is that good?”