by Sir Hardly Anyone and Marianne Trench.

Our complete update on the really big stories this evening that are showing us what a huge thing a football is.  But first, something no one actually said about Fulham but might have

OK so that was the match.  What else is the media saying?

1: Arsenal are on the up and not just in England

The European rankings from the last six games and published by Whoscored.com who have just released this graphic… 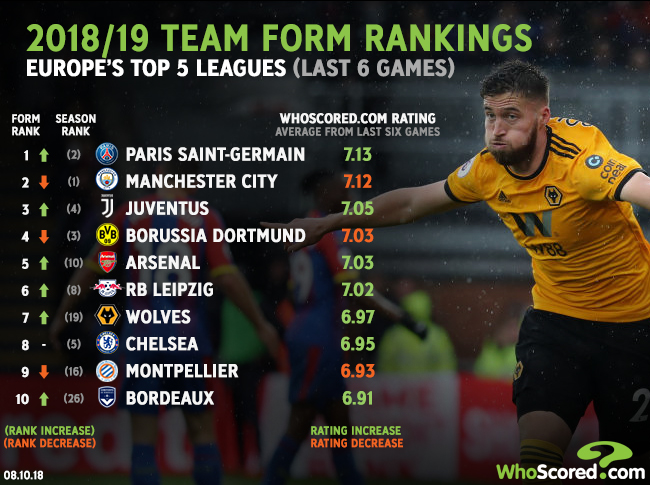 We are equal fourth, although for reasons which do not become clear we are placed fifth.

And the story is that “Arsenal striker Alexandre Lacazette has admitted that it is too early to start talking about the club finishing in the top four this season, according to a report on the Daily Mail.”

And quite how this is a “shocking claim” is not actually revealed.

That’s from Arsenal’s official site, and it is a goodie.

The Bleacher report tell us that “Arsenal are reportedly set to win the race to sign Atlanta United’s Miguel Almiron in the January transfer window.”

When one drainpipe tells us that another drainpipe is reporting a rumour we sometimes feel that maybe it is not that believable after all but rather a bunch of old outlets.  But when we see them say…

“According to Mike Allen of the Daily Mirror, the Gunners will pay in the region of £15 million to secure the attacking midfielder after his impressive season for Atlanta in Major League Soccer.

“In the report, it’s noted the 24-year-old is likely to miss the remainder of the MLS regular season due to injury.”

…well now that does sound like Arsenal.  We buy someone who is injured.

5:  Arsenal head into the Nationalism break with both guns blazing

“The Nationalism Break” comes from 7 am kickoff.  I do like that.  It should replace the “Interlull” at least for a while.

6: He ain’t leaving after all!

That comes from the Express, so just like the child’s toy found on Mars, it must be true.

Yes this is the big big big news.  Ozil didn’t play against Fulham because he was injured.  Who would have believed that?  I mean, really?  Wow!  Arsenal Fever gave us this one.

8: We shouldn’t imagine we are going to win the league

“Hold the horses with title talk” says  Pain in the Arsenal.  But who is talking Arsenal about winning the league?  Is anyone?  Seriously?

9: BBC pundit names the Arsenal player having the biggest impact on the team and supporters

Football.London tells us that it is Lucas Torreira who is having a massive impact on Arsenal, and that the man who said it was former Tottenham Hotspur forward Garth Crooks.  Now that is big time punditry and revelation.  I mean, I haven’t heard anyone say that Torreira is the man who is making a difference.  Have I?  Oh actually yes.  I have.

“Gary Neville doubts Arsenal and Chelsea will challenge for the Premier League title this season” according to the Metro.  Once again we really needed the paper to tell us that.

And a brief commentary on the Fulham defenders as Arsenal closed in:

2 Replies to “Shocking claims: the ten biggest stories about Arsenal doing the rounds this evening.”