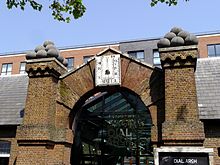 Allowing Arsenal fans to have shares in the club, or perhaps giving a supporters’ group a golden share, is one of the key demands of some fans.  Some also demand a seat on the board of the club to represent fans.

Of course this is nothing new for Arsenal – because the club was originally set up as a co-operative by the working men of the Dial Square factory at Royal Arsenal (the entrance of which is pictured left).  The club quickly expanded into Royal Arsenal FC with a committee elected by the members running the club.

Even in those early days, splits appeared between the members of the club, most particularly over the payment of players and admission to the Football League.  Those opposed to professionalism lost, but then tried every dirty trick in the book in an attempt not just to stop the move to professionalism, not least by attempting to cause the personal bankruptcy of some of the committee members in favour of paying the players.

Ultimately the rebels set up a rival team (Royal Ordnance Factories FC) playing opposite the Woolwich Arsenal ground.  ROF played in the Southern League before ignominiously going out of business part way through their third season.

When Woolwich Arsenal FC (as Royal Arsenal became on joining the League) ran out of money in 1910, Henry Norris rescued the club, paying off all its debts and then offered the club back to the supporters who were able to buy shares in the club.

Norris also made it clear he thought the club needed to move if it was to survive, which local supporters opposed, so Norris then gave his word that the club would stay in Plumstead for two years to give the fans time to buy the shares.  They didn’t and as far as I can tell the local supporters’ group never handed over the money they had raised to help the club stay in Plumstead.

A substantial part of Arsenal’s problem was that after the Boer Wars the army reduced its level of recruitment, and hence employment at the Royal Arsenal declined.  The final blow came in 1910 when the government moved the torpedo factory to the deeper waters of the Clyde.  Employment levels sank, and so did Arsenal’s crowds.

In 1910-12 some supporters did buy shares in the rescued club, but unfortunately not nearly enough to keep the club running without constant financial support from Henry Norris, and so in 1912, after the two year hiatus on moving the club had ended, Norris started looking for a new ground – and found it in 1913 – in Islington.

There was huge opposition from Islington residents to the move, and protests from Tottenham Hotspur and Clapton Orient, but the League had no objection, the Highbury stadium was built, and the club moved forward.   As a result the size of the Arsenal crowd increased massively from under 10,000 in the final year in Plumstead to over 22,000 in the first year at Highbury.

By 1924/5 Arsenal had the highest average crowd of any club in the League – 29.485.   This was more than double the average first division crowd that season!

Yet despite this fans were still resistant to buying shares in Arsenal.  Finally, in 1927, the Hill-Wood family who were opposed to Norris’ democratisation programme of ownership, forced Henry Norris (or Lt Col Sir Henry Norris as he was by then, the military rank being given in the first world war, and the knighthood for his organising and paying for the recruitment and training of three football regiments), off the board.  He retained his personal share holding, and asked some very pertinent questions at the AGMs, but the Hill-Wood family and their supporters had the club.

Eventually they sold their shares, as of course they were fully entitled to do, to the Kroenke family who then bought out everyone else again in accordance with legal requirements.

So although it might look a little like “our club” has been taken away by the Kroenke family, in fact the club run and owned by Arsenal supporters was lost when fans in the early 20th century were given the chance to buy the rescued club, but simply showed no interest.

But let’s remember what it was like when the Hill Wood clan ran the club.  Individual share holders were able to be at the AGM, but had no other rights.  I attended some of those AGMs; we could vote against motions that we didn’t like – but of course the board and its allies with their vast majority of shares could pass any motion they wished and defeat anything we tried to put forward.  Shareholders made their voices heard, as Sir Henry had done after he was deposed, but it never made any odds.

The one time I really had an influence on the club was when as part of the supporters’ group AISA I went to the club with the plan for statues around the ground, both to celebrate our past heroes, and to reduce the crush at the entrances by encouraging fans to meet their mates at one of the statues.

So personally, I can’t quite see the point of the Arsenal Supporters Trust campaign for a voice at Arsenal and a seat on the board, given some of their previous statements and their activities in meetings and the like.  Besides the sad fact is that history shows, Arsenal fans did own their club, but couldn’t make it survive as the local demographics changed.   Trying to undo that now is rather like a little child throwing his food on the floor, being told there isn’t any more, and then crying, “I didn’t mean it.”

2 Replies to “Should Arsenal’s owners give out shares to the club’s fans?”