I’m not sure how many fans Arsenal will have at the ground, but I suspect a modest number, so I am not too sure that much of the excessive shouting will be coming from that sector.  And to be fair that message is within a warning that the actions could help spread covid.

But I rather think going ahead with the Euro matches recently has ensured that the Uefa Variant is now spread throughout the kingdom, and any cheering by Arsenal fans at Hibs is hardly likely to affect the overall situation.

Be vaccinated and avoid international matches would be my recommendation (not that what I think matters a jot).

So moving on, last season Hibernian came third in the league, behind the inevitable top two: 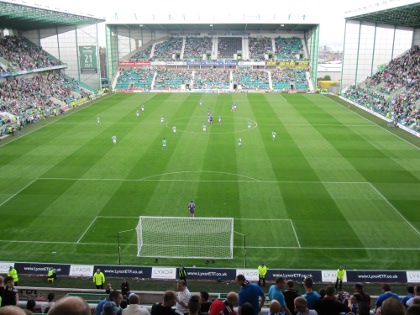 As such they qualified for the Europa Conference League entering at the second qualifying round.

As we can see from the above that they scored 1.26 goals a game and conceded 0.92 goals per game.  This compares with Arsenal’s 1.45 goals scored in the league last season and 0.97 against.

Hibs have already played a couple of friendlies this season.  The first on 2 July against Civil Service Strollers away, winning 3-5, and the second away to Stoke, drawing 1-1.  (When one comes to think of it, playing against Stoke in a friendly is a very dodgy way to prepare for a new season; the club could easily end up with no players available for the next match.  Although they did take the precaution of ensuring that the game was played without a crowd present: a wise move).

Now moving on, following all the work done through the closed season in terms of analysing tackles, fouls and yellow cards I thought it might be interesting to go a stage further and compare the Arsenal results with those of the teams we play.

Here is the table comparing the two sides for these four measures.   Because Hibs played five fewer games than Arsenal in the season the figures are worked out on a per game basis.

So we get more shots per game.  But the huge difference is that we only make 38% of the tackles that they make.  I can only hope we have invested in double reinforced shin pads.  Despite this we get just over half the number of yellows whereas we might expect to get having cut our fouls down so dramatically.

Last season, Hibs came third in the league for only the third time since the SPL was formed in 1999 – they have never made the top two.  They also reached the final of the Scottish Cup and the semi-final of the League Cup.

They have however been lacking in goal scorers for a few seasons their top man Nisbet scoring only 14 goals last season.

Moving on there is either a screamingly funny or boringly pointless video of the match – before it starts.  Funny because the characters are artificial, and pointless because it includes at least three players who can’t possibly play in this game: Odegaard, Martinelli and Saka!   Arsenal win the strange affair 3-0.

If you know the point of this please do write in, because it is utterly beyond me.

Up next: the teams and past games.