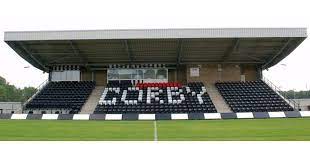 There was a time when, during the interlull – that period when league games are forcibly stopped so that our players can go and get injured playing for countries of whom we know little, even with a globe in front of us – that Blacksheep and I would go and watch non-league games.

Then, for reasons that had something to do with him getting married Blacksheep (a one time regular contributor to Untold) moved back to London leaving me without a companion for the Saturday afternoon games involving teams and indeed leagues I’d not actually.  Eventually I stopped going leaving me with memories such as watching FC United of Manchester play an away  in Grantham – a town that boasts a statue of Margaret Thatcher of all people.

Anyway, returning to the present, there being no Arsenal game this weekend I felt it was time to revive the old tradition – even if there was no pal to go with, and so it was that I have just been to Corby Town vs Hendon Town in the FA Cup.

This was Corby’s fourth match in the Cup this season – and yes I do appreciate that it is only 4 September, but they started out in the Extra Preliminary round just under a month ago (3-1 against Woodbridge Town).  Then it was Soham Town Rangers in the Preliminary round (going through after a replay), to take us to today’s victory over Hendon in the 1st Preliminary Round.

The result was 1-0 to Corby much to the delight of the crowd of just over 500 (the record crowd of the season so far), and in thinking at half time what I might say about the match, one thing that struck me was the excellent spirit in which is was played.

And I retained that view until ten minutes before the end when a 20 man brawl broke out on the pitch, with the referee simply backing away from it all to allow the players to sort things out, calm down and wait to see who was being sent off.   One Hendon man went and there were a couple of yellows.

It was an interesting end to the day, but even without it, the visit to my nearest ground would have been worthwhile, simply to take in another side of football in England that I don’t normally see.   Indeed I am always surprised when I come across fans who, being unable to go to Arsenal games, don’t actually go and watch their local team, and thus don’t watch any live football at all.  Watching football in the flesh is the real thing, the heart and soul, the origins.  I don’t know how one can appreciate football without that experience.

Going to a match reminds one of what is really going on, when the hype of the broadcasters and journalists in their fantasy worlds, is stripped away.  This is what most football in England is about – far removed from the professional leagues, these guys have a day job, and train in the evening, turning out for their clubs for a tiny amount of cash, never expecting any glory or publicity.  Indeed the most they can ever expect is a mention on a web site or two with their name spelled wrongly.

But my main point is that football on TV is not real football.  It is football that is packaged for and by the TV companies, whereas the Northern Premier League Division One (Midlands) is football presented to the small number of fans who turn up.  Football where the pinnacle of success would be a run in the Cup to the first round proper and a game against Oldham Athletic or Sutton United.

Of course I am an Arsenal supporter, and fortunately for me, an Arsenal season ticket holder with the luxury of a superb seat and the ability to afford it, but I’m also a football fan, and I wonder if, with the advent of constant football on TV that concept of the football fan is being lost.

The fact is the vast majority of football is played away from the glaring lights of the TV cameras, the multi-billion pounds of transfer money, and the razzmatazz of make-believe media coverage.   What I saw today with 500 other people is what the majority of football in England is about.

Of course I’ll be back at Arsenal for the Norwich game, fervently hoping Arsenal can get back on track.   But today was a good reminder; the vast majority of footballers play a completely different game from that seen in the elite league, but that doesn’t make it any less football.  In fact, the reverse.  I think the game I watched this afternoon, with no moaning fans but rather fans who wanted their local team to do well in a competition where simply progressing to the next round is fantastic, is real football.

And maybe what makes it so good is that there is no media there, making up gibberish commentaries about transfers that won’t take place, while playing up the idea that the manager is going to be sacked.

It wasn’t a great game of skill that I watched, but it really was football in the grand tradition of football.  I’m sorry I stopped going when Blacksheep moved, and I will go again when we have another blank weekend, and must try, when back at the Arsenal, not to forget that without the clubs way down the pyramid, there would be no Premier League.