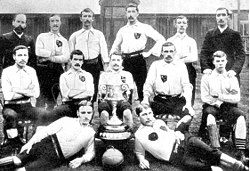 Due to the long-term connections of both Arsenal and Everton with the top division, the two clubs have played each other in over 200 league and cup games – 216 times to be precise.    Of these 199 have been in the top division.   We’ve won 98 – the most victories by one team over another in the 1st Division / Premier League.

This high number is due in part to the fact that Everton were one of the founders of the original Football League, and have spent most of their time in the top division, not necessarily winning stuff, and not as consecutively as Arsenal, but almost always being there.

As a result of this Everton have played 118 seasons in the top division, compared to Arsenal’s 104.  But the big difference between the clubs being that Arsenal managed to survive without relegation since 1919.  Everton have, during the period, taking a few dips into the lower reaches.

In the overall competitive matches between the two Arsenal have won 108, Everton 62 and there have been 46 draws with the first two games coming at the tail end of the 1904/5 season, each club beating the other once in its home match by one goal.

Everton first won the league in 1928, and then rather amazingly the following season just missed relegation   One season later, in 1930 they were relegated.

But it wasn’t the quick decline from top to bottom in two seasons that was so bizarre (after all in the 1930s Manchester City move from champions to relegation in one season), it is the goals credited to Dixie Dean.   From 1925/6 to 1932/3 he was top scorer generally knocking in around 25 goals a year.  Except suddenly in 1927/8 he scored 60 league goals, before returning to his normal level the following season!   If only there had been TV coverage so we could have verify that it was actually him scoring that many goals.  As a one off, it just seems so extraordinarily unlikely.

Everton visited the second division once more after finishing bottom of the league in 1951 and this time spent four years in the secondary level before returning in 1954/5.  Thus through these two trips down below they have failed to come close to Arsenal’s 100+ consecutive years in the top flight.

They did however win the First Division nine times, the last being in 1987, and they have won the FA Cup five times.  They’ve also won the Cup Winners Cup once – that being in their “Double” season of winning the CWC and the League in 1984/5.  (Arsenal you may recall have won the Leage

These days we generally do quite well against Everton – in fact in the last 24 Premier League home games we have won 20 of the matches and drawn four.   If we were to lose this time, it would be Everton’s first home and away double over us since 1985/6.

And if you would like a quirky statistic – we never lose on a Friday.  We’ve played nine times on Fridays – the most any club in the league has played on a specific day without being beaten.  The results have been seven wins and two draws.

Everton as we have noticed in the previous piece have gone five without a win.

Up next, the teams.

The Midweek Combination: how it was stopped and what next