Today was a five star performance from the Arsenal against a Villa side that might need to readjust to life in the Championship if they can’t get their act together soon. But I’ll leave the match report to Walter when he gets back from leading Arsenal Belgium to the Emirates.

I experienced 5 things (good and bad) that I thought worth noting today and I’ll start with the lowest and end on a high.

Tony and I had arranged to meet Walter and the Belgian Gooners outside the Armoury early, so we headed off from Northampton at the uncivilized hour of 9.45 (uncivilized for a Sunday – as I’m usually still in church* at that time!). We arrived at the Ems at about 11.30 and I was already hungry. There were a fair few people milling around, young fans, foreign fans (I heard Germans chatting nearby), Villa fans (looking miserable already most of them) and some police and stewards.

Then a bloke asked me if a wanted a ticket ‘tickets, buy any spares, anyone need a ticket?’. For the more honest of you who don’t know, this guy is a tout. A ticket tout.

Note this from The Gooner News in 2013

“Can I get a ticket without all this membership stuff?
Touts operate around the ground, and do sell tickets. But remember, touting is a criminal offence, and the ticket you buy might be a fake. So you could end up wasting your money, and being hauled off to a police station for the duration of the game.

Plus remember that the price via a tout is going to be much inflated for most games. I have been offered £750 for the use of my season ticket for a single match – while the cost of the games works out at about £45 each on my season ticket. That £750 is the price the tout offered me. I presume, had I been stupid and given in, he would have sold it for £1000.”

for the record the stewards were close by, as were police , and no one did anything to stop his illegal activity. I tweeted the image and one of my friends on there reported that there was a dozen touts operating under the noses of the police on the other side of the stadium. I don’t see how this can still be happening in the 21st century. No one should have to pay more than face value for a ticket, EVER.

Soon after we met up with Walter and the Flemish hordes and we were in for a treat. The club had invited the Belgian supporters group to go into the ground before the match to greet the team as they arrived on their coach. And Walter said that his fellow Untolders (Andrew, Tony and myself) to join them. So, unsure whether I would need to pretend to be Belgian or not (I have one word of Flemish, alstublieft – or ‘please’ and I don’t look very Belgian) I joined the queue with the others and before you could say ‘TinTin’ I was in.

Bedecked in my Visitor’s Pass I felt about 12 years old again as we all waited for the team bus to appear. I watched Pat Rice and Ivan Gazidis drive in and maybe Thierry Henry (not sure, it was fleeting…) Then I snapped Tony with one of his oldest dancing partners… 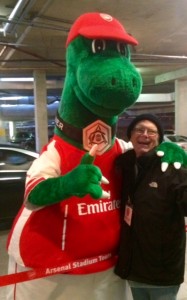 …before a huge coach pulled up and the squad got off. The BFG was first with le Boss and Stevie Bould bringing up the rear. None of the players smiled much or interacted with the fans but they did all high five or fist pump Goonersaurus. They looked focused and given what they were about to produce I can forgive them. It was exciting though and thanks to Walter for making it happen. 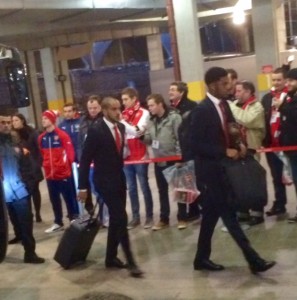 We watched Arsene Wenger give his pre-match interview (I couldn’t hear a word but then again I cant hear a word INSIDE the stadium either, so no change there!) before we were invited to have our picture taken in front of the players’ entrance (hopefully Walter will post the full pic when Arsenal send it to him) 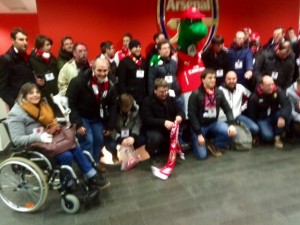 Once outside with an hour to KO my stomach was rumbling so Andrew and I set off in search of food (are you paying attention Nicky?)  We didn’t have to go too far because just opposite we found a stall selling hot salt beef bagels. Loaded with soft pink beef and housed in a fresh bagel, with yellow mustard and gherkins this was a treat for £3,50 – yum!

But I went from food heaven to drink hell in a matter of minutes. Once inside the stadium I found Walter, his wife Carine, and Tony at the bar and I ordered a glass of red wine. £5.90 for a ‘Merlot’ – well that’s what it said on the label – “Do you want a cup” asked the girl serving me. Really, a cup/glass, how novel. I did. It didn’t improve it much. It was nasty, take my advice – avoid at all costs!

The game was great, especially in the second half and there was plenty of good humour around the North Bank. We enjoyed Giroud’s goal (and Özil’s assist), Özil’s goal was sumptuous, Theo’s was very well taken, Cazorla’s penalty (which looked soft from where I was) was amusing when we saw Guzan’s reaction but the peach for me was Bellerin’s shot. It seemed to take him by surprise and he didn’t really know how to celebrate. I’m really pleased  for Hector because he has emerged as a proper talent this season and that was the icing on the cake for his performance today. 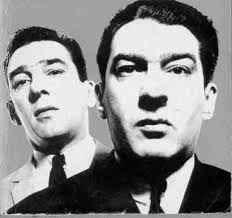 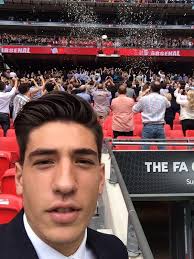 41 Replies to “Gunners vs Villains: five of the best (and worst) and a new hero emerges”