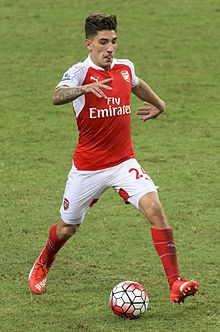 You’ll perhaps know that the central theme on this blog this summer is that Arsenal underwent a revolution last season, dramatically changing the style of play of the team, and that as a result the last two thirds of the season saw a dramatic improvement in form.    The argument has been put that this improvement was a myth caused by the fact that we only played lower grade teams in the latter part of the season.   That story is totally untrue as we showed in the piece Arsenal only did well after Xmas because the fixtures were much easier.

But what was this transformation that the club effected – and which the media utterly refuse to mention?  Statistically it is easy to see (although 99.99% of all known journalists still can’t grasp it).  Arsenal dramatically changed their approach to tackling, and as a result cut their yellow card figure by almost half – something no other club managed to do.

Now we have some more hints, most notably by Hector Bellerin who, speaking to the High Performance Podcast, said, “I think, personally, at Arsenal, [the emphasis on small details] is something which has changed a lot,” he said.   “The ethics and the way [we] work since Mikel has been the manager of the club have completely changed.”

He didn’t mention the tackles / fouls / yellow card analysis, which is the outward sign of the change (and which I am not surprised to find, as I suspect the players have been told not to mention it), but instead spoke about, “the way we run back or the way we create space for a player.”

In particular he spoke of the way a player can move to get an opposition player to change where he is, saying, “Sometimes a goal is created not by the player who passes the ball or the player who scores, but by the player that actually created that space and did what he had to do at that time.

“Many people among the fans, in the stands or even pundits sometimes, they won’t see that. But, truly, that’s what we’ve practised, that’s what the coach has asked and, by the player doing that, we were able to score that goal.  Even sometimes for the players it’s hard to see, when other teams do it…”

He also picked up on the allegation that Arsenal were not cutting it against the top six, noting that Arsenal beat Chelsea twice, beat Manchester United and drew against them, and beat Tottenham at home.  “It’s only City and Liverpool that I feel are that level ahead of us,” he added.

So we come back to the old question: why is it that the media and bloggers cannot bring themselves to accept that Arsenal went through a revolution last year and came out with all flags flying.

Certainly from what we have seen there is a tendency of journalists and bloggers simply to copy what someone else has said, without checking the facts.  This has two impacts.  First, stories do obviously get repeated without being true.  But secondly, because everyone is saying the same thing (that Arsenal had a dreadful season is repeated) it becomes accepted, and is never investigated.

Thus 90% of articles and blogs start with words along the line, “Arsenal had a terrible season”.

And in fact, that opener can be found in articles all the way through the last decade – a decade in which we won the FA Cup four times in seven seasons, something no other club has ever done.  The previous record of four in eight was also held by Arsenal.

Yes of course it is true that since finishing second in 2016 the league position has been very disappointing, but it is not unknown for top clubs to slip for a while.  But at least we have not slipped as much as Manchester City did one time, winning the league one season and being relegated the next.   But looked at afresh, denying the recovery last season does seem like a solid desire to knock Arsenal )(as well as appallingly lazy journalism).

However the reason is simple: the media publishes what the media publishes – meaning the media simply won’t step out of line from what everyone else is saying.  So bloggers who feel that they ought to copy the media (rather than point out that it is wrong 95% of the time, as Untold does) just repeat the stories over the over.

Then, sports journalists, who read the blogs, see that most of the bloggers are saying how awful Arsenal were last season, and so tell us that 2020/1 was a season to forget.  When of course it wasn’t.